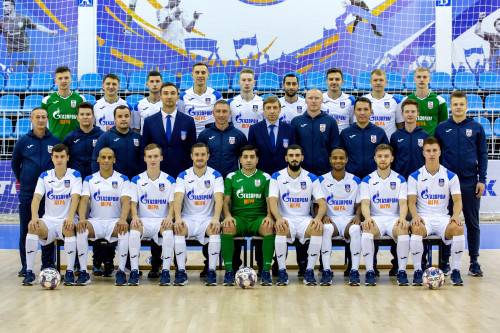 We can safely say that the biography of our club began with a sensation. The newly created team immediately won the tournament in the Ural region. Definitely, these were only the games of the second league of the regional futsal competition. But never before had any team moved from the Second to the First League so fast in the very first tournament.

However, even before there was a victory, after which we had the idea to create our own club. It was a run-of-the-mill friendly match between the athletic teams of the Ural Polytechnic Institute and Tyumendransgaz. We won and decided that we would win further. So in 1993, the club “TTG” appeared in the standings of futsal games of the country. The team recruited the best athletes from those who played football for the enterprise, and a number of guests. The general director of Tyumentransgaz, Grigoriy Nikolayevich Polyakov, was elected president of the club. And Yuri Dmitrievich Ivashin became the first coach, under his leadership the team began to play in amateur tournaments.

The 1994/1995 season brings the team a ticket to the Major League. Further on, debutants from Yugorsk do not stop there and take bronze medals in the very next 1995/1996 season. A year later, this result is repeated together with reaching the final of the Cup of Russia. During these years, the coach Ivashin was replaced by Evgeniy Pavlovich Podgorbunsky. In 1997, the team changed its name. Under the name “TTG-Java”, we were actively building up our potential, but then several strong players left the club which made it impossible to stay in the list of winners of the Major League.
However, the Ugra newcomers did not need much time to please their supporters, which was considerable merit of the new coach, Ivan Alekseevich Varlamov, who managed to form a new squad of players who knew each other from the game in the previous teams. After his retirement, Aleksandr Viktorovich Rymko takes over the team. Under him, not only the financial part of the club was improved, but also the players who were able to lead the team to the long-awaited victories were invited.

The next success of our club in the championship of the Russian Major League, which was a “bronze” again, came to us in the 2000/2001 season. The team again raised its bar to the same level. However, our traditional rivals also grew. We couldn’t rise above fifth place in competitions until the 2006/2007 season. The fourth bronze award won in the history of our club was the logical result of several years of thoughtful work by the team leaders and the stamina of its players. Brazilian players were signed for to the club, thanks to which TTG-Java now does did not descend from the podium of the Major League.

The following year, the team, which four times in its fifteen years climbed the podium for the “bronze”, finally won the “silver”. This star season was 2007/2008! Do not forget that it was the years when Eder Lima and Robinho were named the best.

In 2010, our club gets its current name Gazprom-UGRA and already under it wins the ISMA Futsal Friendly Cup international tournament, the Russian Cup 2010/2011, and again takes bronze medals in the Russian Championship in the 2011/2012 season. The sixth one!

The Sixth Futsal Cup Winners tournament, the most prestigious international competition, brought together participants from Serbia, Kazakhstan, Belarus and Russia in Yugorsk in 2012. Last games had been held only in Europe: in Italy, Spain and Serbia. This time Yugorsk keeps the Cup of Cups at home.
Ugra supporters in 2012 were also pleased with the youth team of Gazprom-UGRA, which won the Russian Cup in the final of the competition in the category of under 20, adding one more award to the victory in the championship for the youth teams, which was won in the 2008/2009 season.

Season 2012/2013 brings the second “silver” in the history of Ugra players. The team won this victory under the leadership of a new coach, who became Paulo Ricardo Figueiroa Silva (Kaka).

In order to fight for the gold of the Russian Super League in the 2013/2014 season on the site of the Yubileiny Pavillion, the team of our club played against the Moscow Dina. As a result of the first two meetings, the teams exchanged victories. The decisive matches of the Championship were held in Troitsk. After the overtime, the Muscovites left the field after the winning goal 2-3. In the first half of the fourth match of the final, goals were exchanged by our Dmitry Lyskov and Eskerdinha from Dina. Until the final of the second half, this score remained unchanged. Only after the 47th minute, Alemao managed to escape alone and scored the second goal. For Dina, this strike was victorious. We got the silver. The second consecutive in this Championship.

In the season 2014/2015, having won the final victory over Dynamo Moscow with a score of 7-2, our team won gold medals for the first time in its history, and with them the title of champion of Russia.

In the 2015/2016 season, we won the Russian Cup for the second time, in the finals we beat the FC Sibiryak with a total score of 10-4 for the sum of two meetings.

In the same season, our team for the first time in its history won the right to represent the country in the draw of the main European futsal club tournament of the UEFA Cup. And on April 24, 2016 in Guadalajara (Spain) the final stage took place, where Gazprom-UGRA, in its debut performance, achieved victory by beating the hosts of the Final Four from the Spanish club Inter Movistar with a score of 4-3, and became the owner UEFA Cup.

Again we reach the final of the Championship of the country. Again we play against Moscow Dynamo. Again, the champion decided only in the fifth match. All the decisive events of this meeting took place already in extra time. After the expulsion of Zviad Kupatadze, our team spent the last minute of the second half in the minority. And the beginning of the overtime began with an incomplete lineup. A little later, three Dynamo players and two Gazprom-UGRA players remained on the court altogether. Dynamo pulled ahead, Robinho is unable to equalize with a free-kick. Even an attempt to play with an extra player failed. Moscow players score twice in an empty net 5-2. Gazprom-UGRA is on the second step of the podium.

In the 2016-2017 season, in a series of matches for the 3rd place, our team defeated away the rivals from Sibiryak twice and completed it on their home ground in the next game. Gazprom-UGRA is a bronze medalist of the Russian Championship. the seventh one!

In the 2017/2018 season, we became the three-time owners of the Cup of Russia, having survived in a difficult battle against Norilsk Nickel.

The rival of the club in the final of the 2017/18 season Championship was the Sibiryak team. We did not succeed in taking the final step and winning the final series in dry. However, the work on the mistakes was done in a timely manner, and the club’s futsal players began the fourth match very actively and the team left the break with a margin of three goals. The final score of the match was set by Katata, punishing the hosts for negligence in the majority. 6-0 our club won the match, series and won the gold of the Russian Championship.

Gazprom-Ugra is a two-time champion of Russia.

In the final match for the Cup of the country of the season 2018/2019, two teams from Siberia came together: Gazprom-Ugra and Tyumen. The first round did not reveal the winner. The meeting in the “Centralniy” pavilion ended with the score 3-3. But in the second leg, already at the home venue in Yugorsk, our team won 8–4 over Tyumen and became the four-time winner of the Russian Cup.

CLUB IN CHAMPIONSHIPS OF RUSSIA

ACHIEVEMENTS OF THE CLUB IN THE RUSSIAN CUP

OTHER ACHIEVEMENTS OF THE CLUB