In the first match of the 3rd round, we won in Ekaterinburg with the score 4-3. The hosts scored first in the 2nd minute, when after a kick of Sergey Abramov the ball bounced and from the opponent’s player flew into the net. We answered back 15 minutes later: Katata from the corner passed the […]

In the first match of the 3rd round, we won in Ekaterinburg with the score 4-3.

The hosts scored first in the 2nd minute, when after a kick of Sergey Abramov the ball bounced and from the opponent’s player flew into the net. We answered back 15 minutes later: Katata from the corner passed the ball to Andrey Afanasyev who scored into the gates of Zurab Kalmakhelidze.

The second goal of Gazprom also took place with set-pieces. On the 31st Vladislav Shaiakhmetov played a free kick and Dmitry Lyskov from the killer position did not miss the goal. Two minutes later, Lyskov scored his double, striking into the bottom corner. Ten minutes before the end of the match, Abramov scored confidently off the pass of Konstantin Agapov and the owners of the parquet came close to the rivals.

On the 43rd minute, Anton Sokolov scored too, however, we almost immediately got the lead back with Afanasyev, it was his double.  As the fifth field player on the court appeared Dmitriy Prudnikov, but they couldn’t escape from the defeat. In the first of the “Match of the Tour”, the victory is ours.

Press conference with the participation of the head coaches and players. 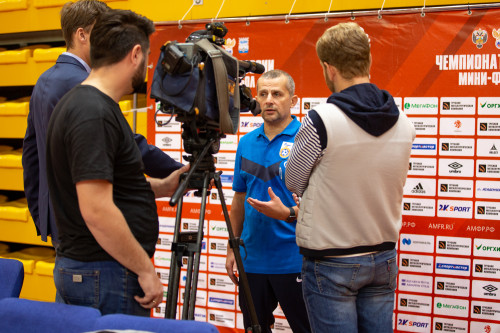 – Very difficult game. The opponent was very fast, they ran great into the counterattack, they created enough moments near our gate. We needed to handle it and try to calm this game a little.

In the second half we played more reliably with discipline. There was a period when we led, but the rival was able to improve and draw the score. I think that we deserved this victory. In the last round we had two matches, in which we may not have deserved defeat, but still we lost the matches. Today it was an equal game with chances for both teams, but luck was on our side. 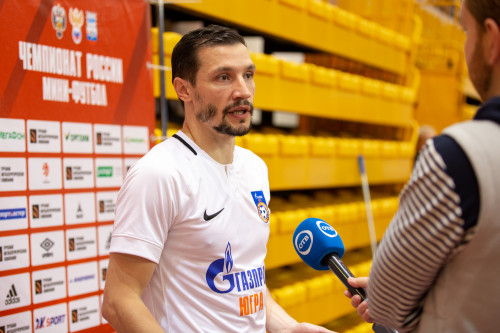 – Today we tried to stick to the tactics of “playing with a pivot”, trying to move the game away from our gates in the course of the game. We felt more comfortable this way. After the opponent changed their game and started playing closer with the pivot, not allowing us to quickly pass the ball to them. We also had abandoned areas in the second half, probably, because of the fatigue. I can say that this tactic has brought us success.

– The result is unsatisfactory. We had no emotion left. I want to thank the players for their work. Unfortunately, we did not succeed and did not get three points. The opponent’s goalkeeper was on top today, saved a lot, but we still need to score our moments. We need to continue to work and the result will come. Today we played well. The supporters saw our futsal, saw that we had chances to win. I think they liked the game. Tomorrow I would like to make everybody happy – happy not only with victory, but also with a good game, with achieved results.

– Today we lost 3-4. I think that it was not a matter of bad luck, but we lacked defense against set-pieces. When we prepared, we analyzed the game, worked it out, but still made mistakes. We will correct mistakes and continue to strive for victories.