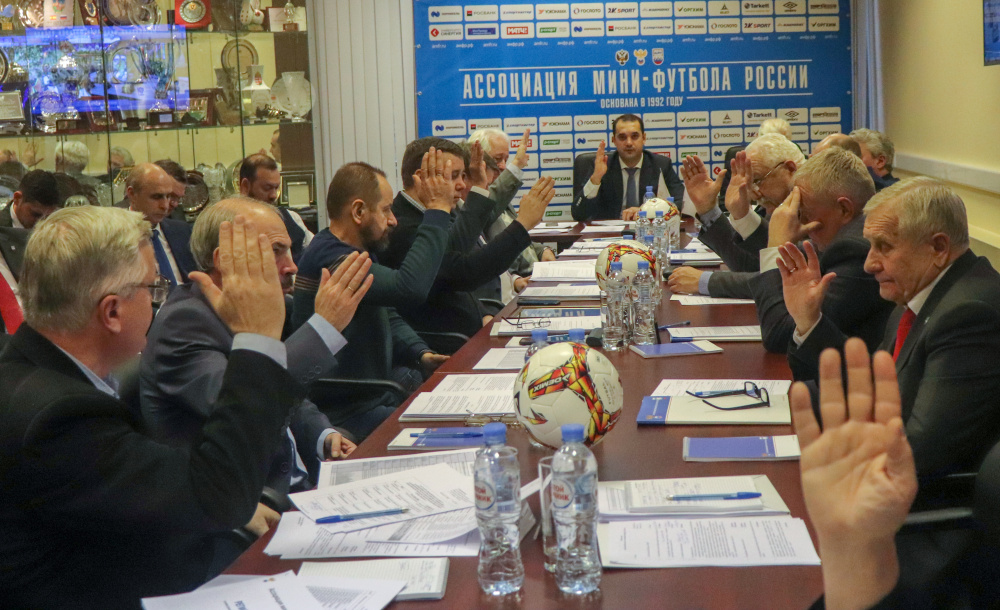 In his opening speech, the President of the Association of futsal of Russia, Emil Aliyev, congratulated the members of the Executive Committee on the upcoming holidays, noting the main successes of domestic futsal in the outgoing year: he spoke about the current state of affairs in the leading leagues and the development of mass projects. Among […]

In his opening speech, the President of the Association of futsal of Russia, Emil Aliyev, congratulated the members of the Executive Committee on the upcoming holidays, noting the main successes of domestic futsal in the outgoing year: he spoke about the current state of affairs in the leading leagues and the development of mass projects. Among the main achievements are the victories of the national teams of the country in the international arena, informational coverage of futsal events on the Match live broadcast! TV, increase the amount of live broadcasts on the Internet. 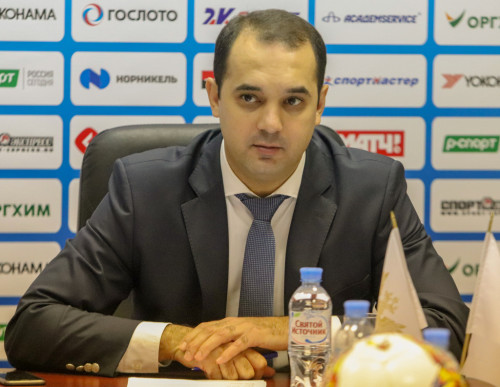 The solemn moment at the beginning of the meeting was the presentation to the member of the AMFR Executive Committee, Daniel Kot, who made a significant contribution to the development of futsal in the Arctic, the Certificate of Honor of the Association of futsal of Russia. 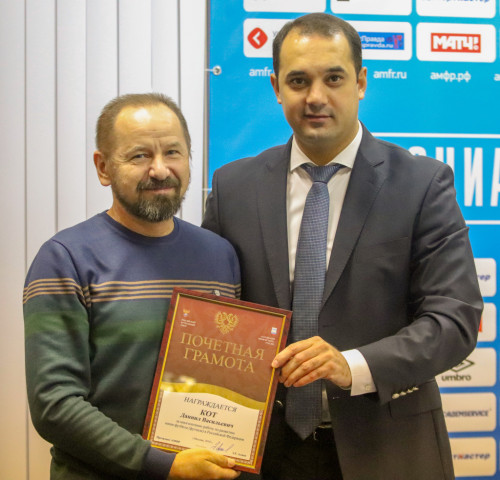 Mentors of the Russian futsal teams Sergey Skorovich and Yevgeniy Kuzmin reported on the performance of their teams. In connection with winning the European national team of bronze medals at the European Championships and maintaining the first position in the UEFA rankings, the triumph of both student teams at the World Championships, the silver debut of young men in the Olympic competition system and the release of the main women’s team to the final of EURO-19, the national coaching staff teams recognized by the Board successful. 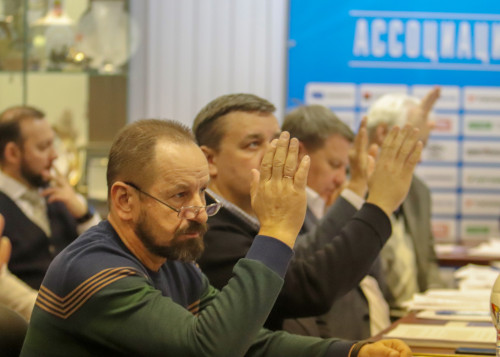 The members of the Executive Committee also supported the idea of ​​separation of powers in the men’s national teams of the country: it is supposed to leave the first team, the student team and the U-21 team behind Sergey Skorovich. National teams U-19, U18 and U17 are invited to entrust Konstantin Maevskiy. This proposal will be sent to the Russian Football Union for further consideration.

The work of the AMFR judiciary headed by Nikolay Tsaplin also deserved a positive assessment of the Board. A distinctive feature of the first part of the current season was the absence of suspension of arbitrators, a detailed review of all matches of leading competitions under the auspices of AMFR, including the East Conference, vigorous regional activity within the framework of the Futsal Academy, and the implementation of the referees’ communication system in Super League matches.

The decision of the Executive Committee approved the results of the following competitions:

– IV Cup of Russia in futsal among corporate teams;
– The XIV International Futsal Tournament among the teams of educational organizations in the framework of the All-Russian project “Futsal into school”;
– Joint projects of AMFR and partner companies MISHKA-Rosbank, MISHKA-Sportmaster and the joint program with the MMC Norilsk Nickel “Futsal into school. Region of the Arctic;
– Open Championship of Russia among teams of girls 2000–2001;
– Orgkhim-Cup of Russia among junior futsal teams.

Deputy Director General of AMFR Denis Fedyaev presented the project “Rating of futsal development in the subjects of the Russian Federation”, as well as the results of the first edition of the rating, noting the interest of colleagues from the regions to strengthen positions in the specified rating, which will positively affect the further development of our sport. A new direction of the Futsal Academy was announced, aimed at systematic training of the youngest futsal fans and providing for the organization of classes under the guidance of qualified coaches from Odic involvement of the leading representatives of the futsal coaching workshop, including the coaching staff of national teams, as well as a unified methodological base.The implementation of this direction in the near future will take off in five regions: Moscow, Stavropol Territory, Tula region, Murmansk and Astrakhan.

Denis Fedyaev also noted his contribution to the improvement of the material and technical base in educational institutions of the Russian Federation together with partners of the AMFR. Since the launch of the project “Futsal into school”, the project participants were given 84 thousand balls, 120 thousand shirt suits and uniform sets, 42 thousand tracksuits and 70 seminars for physical education teachers. 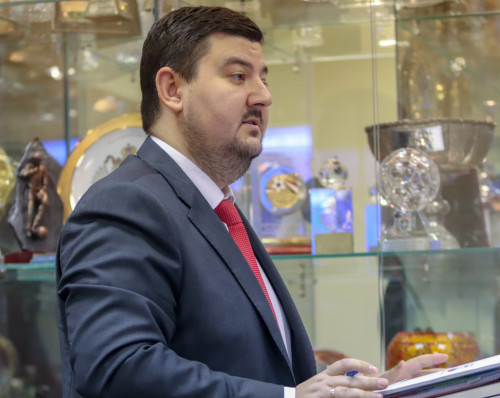 The project “Regional League”, which provides for the integration of local championships of leagues with a rank lower than the First League into the official AMFR competition system, was introduced by the deputy general director Aleksandr Klimanov. The project was supported by the members of the Executive Committee, along with other initiatives presented during the meeting. 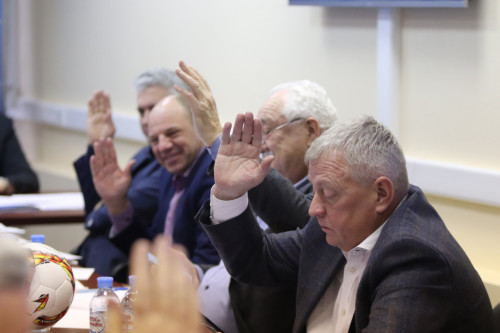 Much attention during the meeting was given to the issues of youth football. The head of the professional futsal and reserve training department Maxim Savenkov spoke on the preparation for the final stage of the Orgkhim-Russian Championship among the teams of young men and women, which will be held in the Nizhny Novgorod region from 4 to 10 March. In the current season, as an experiment, in addition to the three traditional age groups (U-18, U-16 and U-14), children and youth teams under the age of 12 will fight for victory in the championship. It is expected that with the support of Orgkhim holding, 128 teams or about 2000 participants will take part in the final stage, which will be a record figure. 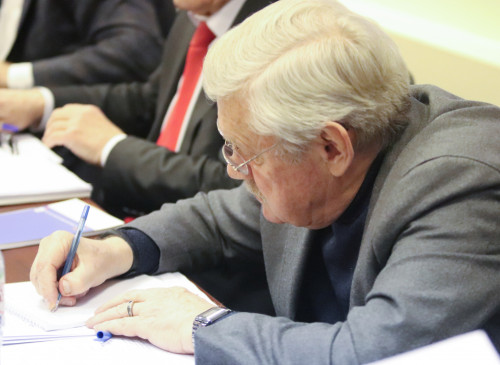 The official ball of the Orkhim-Russian Championship of the Demix brand was also presented during the meeting. In the near future, sets of gaming balls for competitors will be transferred to the regions. 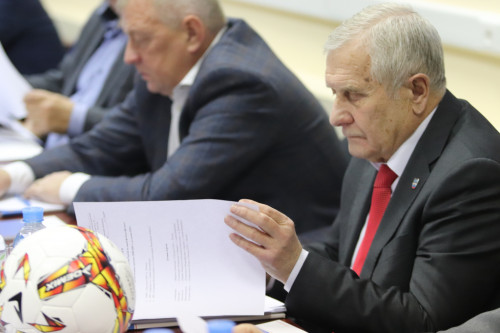 By the decision of the Executive Committee, the Football Federation of the Khanty-Mansiysk Autonomous Okrug – Ugra was accepted as a member of the Association of futsal of Russia. The signature under the relevant agreement was substituted by AMFR President Emil Aliyev and the head of the Federation Sergey Vlasov. 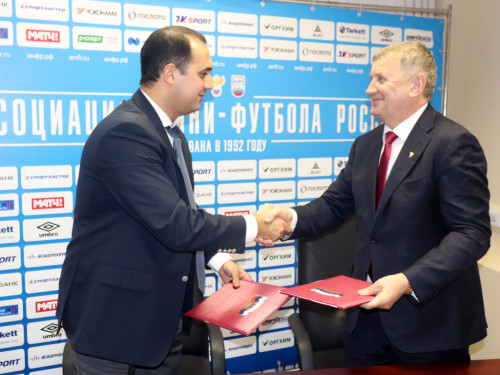 DMITRIY LYSKOV: “WE’LL DO OUR BEST TO RETURN LEADERSHIP”