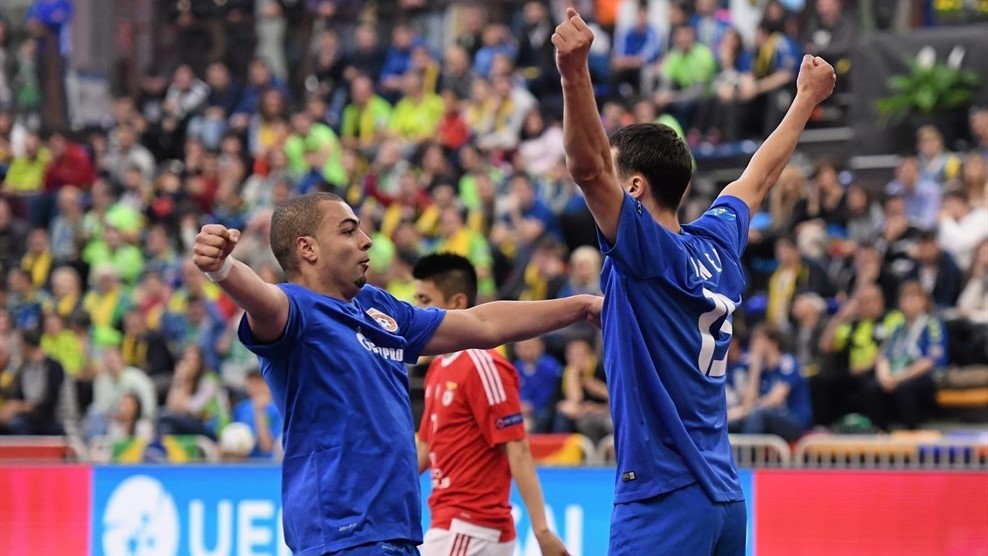 The leader of “UGRA” Eder Lima in an interview with UEFA.com remembered the triumphant last season and said that his team is ready to win the second consecutive UEFA Futsal Cup. – What is it like to win the UEFA Cup in the debut season of the club in the European arena? – Truly unforgettable! […]

The leader of “UGRA” Eder Lima in an interview with UEFA.com remembered the triumphant last season and said that his team is ready to win the second consecutive UEFA Futsal Cup.

– What is it like to win the UEFA Cup in the debut season of the club in the European arena?
– Truly unforgettable! Last year turned out to be one of the most significant in my career. On the first attempt to win such an important title, this what I could ever dream of.

– What did you feel when you lifted the trophy over your head?
– There was a realization of the fulfilled debt – the best of all possible sensations. Any club in Europe would like to be in our place, with the so desired trophy in hands. Feelings experienced in those moments will remain with me forever.

What is the most vivid memory from that triumphant tournament?
– Actually, there are a lot of them. I remember the duel of the elite round against “Kairat”, which was a favorite. Then we won [5-2, Lima made a double]. Then we had hardest matches of the final stage with other European grandees – Benfica and Inter. I will never forget the penalty shootout with the Portuguese. It was the most difficult moment – nerves, emotional. But we coped with it and passed on.

– What is the peculiarity of this tournament?
– It is unique, because it gives an opportunity to compete with European teams. We often compare it to the football Champions League; you meet in another country with strong rivals. This is important not only for the image of the club, but for us, the players.

– What are the strengths of the other three participants of the final tournament – Kairat, Sporting and Inter?
– These are the best teams in Europe, they have many foreigners. Each has its own strengths. I will not say specifically, but, believe me, we know about them. We will try to cope with their skills, because in “Ugra” we also have high-class players. We understand: it is necessary to work very hard to achieve a positive result.

– No club won the final tournament twice in a row. How do you assess Ugra’s chances of breaking this tradition?
– I repeat, we are to play against any of the three strongest clubs in Europe. It will be difficult, but was it easy last year? If all the guys put 100% their efforts, make a minimum of mistakes, we will have a chance to go down in history.

– Who can claim the title of the best scorer of the tournament, except for you?
– Now I do not even think about such things. The most important thing is to reach the final and try to win the title for the second time in a row. But this is the most difficult thing. If the team succeeds, but I will also become the top scorer, of course, I will be happy twice.

– How is today’s “UGRA” different from last year’s?
– I do not think that the difference is great. Yes, there were significant losses. But in “Ugra” we still have a lot of high-level players, we 14 strong players. We are only left to concentrate on work.

– You are the key player of the Russian national team. With what feelings do you remember 2016 – with happiness from participation in two finals or with disappointment from defeats in them?
– First of all, I’m happy, because we managed to lead Russia to the silver medals of European and world championships. This is a high place, we deserve it, because the team is one of the best on the planet. On the other hand, of course, it’s sad. Especially offensive for the defeat at the world championship. There we had every chance to take the gold, but lost to the Argentines. I understood that this could be the year of our team, that’s why I felt disappointed.

– In the quarterfinals of the world championship you confidently beat Spain, 6-2. What did that success mean to you?
– Not only for me, but for the whole team, it was an important event. We understood that the Spaniards are a powerful opponent. If I’m not mistaken, they have not lost to anyone during the regular time for about 15 years. The more valuable it was to win with such a large score. But there was still a semi-final against Iran and the final, which, sadly, didn’t come out for us the way we wanted.

– You were recognized as the second best player in the 2016 World Cup.
– This is an important achievement in my career – the result of the work done, and not just luck. It turned out to demonstrate to everyone that a lot of work brings fruit to you and your team. It’s a pity, we did not take the title, but the title of “second best” will always stay with me, as some warm memory. I was awarded this prize thanks to teammates, their help is invaluable.

– In addition, you hit the top three of the scorers with your ten goals, along with the Portuguese Ricardinho and the Brazilian Falcao. What is it like to be among such players?
– This is a great pride, because we are talking about Mundial, and not about some small tournament. The best players of the planet compete here, and in competition with them I managed not to hit the dirt in the face. But once again I will say: If I hadn’t help from my partners in the team, it is unlikely to have happened.

– At EURO 2018 in Slovenia, the Russians can repeat the achievement of 1999 and win the tournament?
– Of course, there are all chances. We can not repeat the mistakes that we made in the last finals. They were too expensive for us, we just lacked some details. I hope that we will be able to reach the finals again and finally win the title. Russia deserves it!