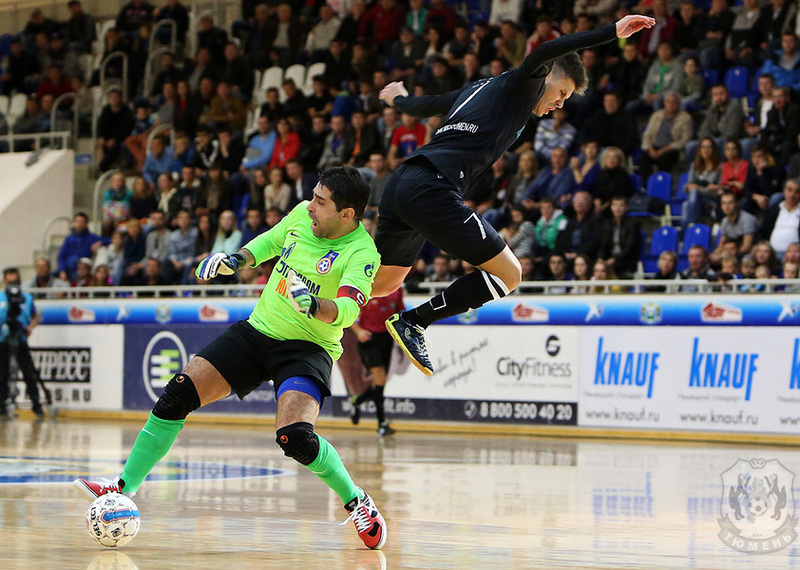 In the first leg of the semi-final of the Cup of Russia in the open football “Tyumen” “blew off” all their moments and eventually lost to “Gazprom-Ugra” with the score 1-6.

The Tyumen derby in the first leg of the semi-final of the Cup of Russia didn’t disappoint futsal fans: from the starting whistle, both teams decided to surprise each other by attacking football. After the first 25 minutes the difference between “Tyumen” and “Gazprom-Ugra” was small, but significant: the guests of the SC “Centralniy” took more advantage of their chances and went to rest, leading 2-0. In the 8th minute Shayahmetov assisted Dmitry Lyskov in the throw-in and in the 23d minute he himself coolly sent the ball through a single touch along the beautiful trajectory into the far top corner.

Zviad Kupatadze all the time got in the way of the host team, he won the duel with Batyrev twice. Antoshkin and Sokolov didn’t carry out their attempts. “Tyumen” was as creative as “Ugra”, but the goal of the guests remained impregnable.

The second half only confirmed the trend set before the interval. Kupatazde stopped the point-blank shot of Antoshkina and Batyrev hit the crossbar at the killing range. The answer came immediately: “Gazprom” led a counterattack and Sokolov scored an auto goal rebounding the shot of Chishkala – 3 to 0 in the 31st minute.

Although Lobkov soon cut the distance with the pass of Antoshkin, the outcome of the game was foreclosed. The “black and white” didn’t give up till the end though. In the 36th minute Marcenio carried out a miracle-kick, followed by Chishkala catch Aksentievich by surprise in the near corner. After the episode, Evgeniy Osintsev replaced the Serbian goalkeeper by Sergey Loginov, but he also couldn’t stay unreachable: Davydov and Niyazov by a simple one-two outplayed three defenders, and the one scored the final 6 to 1, which doesn’t leave many chances to “Tyumen” to reach the final of the Cup of Russia following the results of the return game.