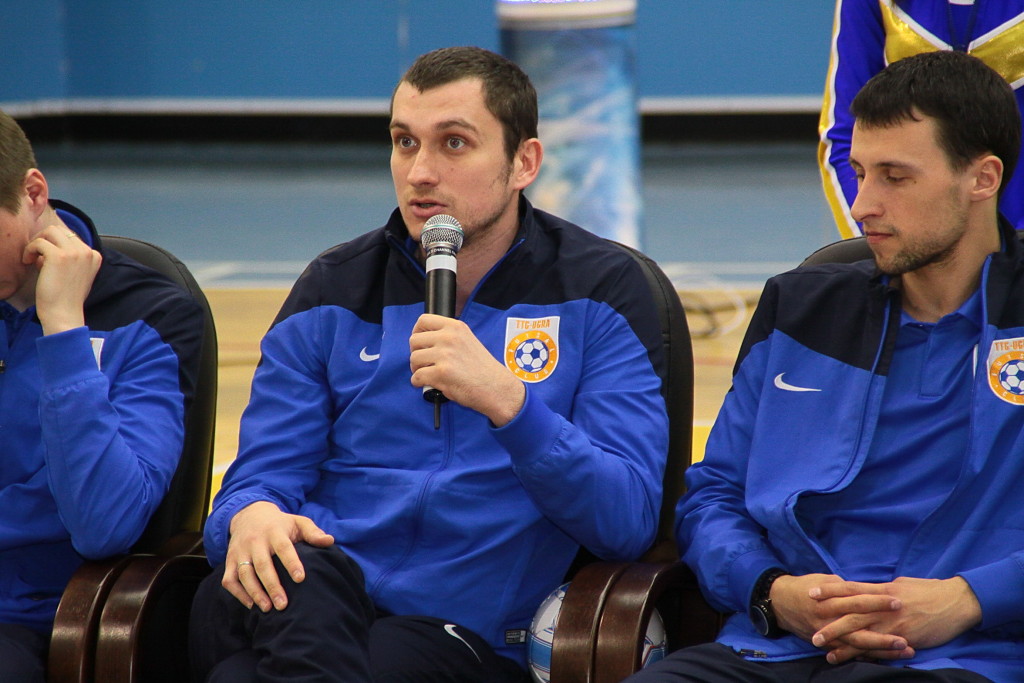 SLEMZIN: GONNA FIGHT FOR FANS AND FOR EACH OTHER

Before the match of the 15th round of Super League, “Gazprom-UGRA” goalkeeper Sergey Slemzin gave an interview to the AMFR (Russian Futsal Association) about goalkeeper’s role in a team and about the upcoming game against “Sibiryak”. – Sergey, before the New Year Eve you received the award “Person of the Year” in your home city […]

Before the match of the 15th round of Super League, “Gazprom-UGRA” goalkeeper Sergey Slemzin gave an interview to the AMFR (Russian Futsal Association) about goalkeeper’s role in a team and about the upcoming game against “Sibiryak”.

– Sergey, before the New Year Eve you received the award “Person of the Year” in your home city of Novomoskovsk. What does it mean to you?
– It is a great honor for me. I am happy to know my home city does not forget about me, they follow my victories and my achievements.

– You also lead a broad public activity. Could you, please, tell us more about it.
– Basically all my work is with children and I also give master classes. This year we have launched in Novomoskovsk and nearby towns a school tournament in my name. I would be very happy if my example could encourage children to do sports and stay away from the streets. I believe that my duty is to carry out such kind of social activities regardless of victories and awards, especially since it gives me great pleasure.

– Let’s go back to futsal. It is been a long time you don’t enter the floor and finally you play against “Ukhta”. What is it like to be back?
– Yes, I had a serious injury, yet from the playoffs of the last season. Then it felt like I had recovered, I did not feel any pain, but then I got back. So I’ve been away from futsal for more than half a year. It is impossible to describe the emotions of coming back. Participating in the game and watching it from the stands is like heaven and earth. When you can not help the guys, you feel separated from the group. You awfully want to share everything with them, both joy of victory and bitterness of defeat.

– Zviad Kupatadze was in great shape in the first half of the season. What steps do you need to take to prove Kaka, that you are number one in the team?
– The most important thing is the way you treat your job. It is important to do your best at the training sessions and use all the given opportunities. You also can never gloat, if something goes wrong for your competitor.

– Vyacheslav Chanov, goalkeeper’s coach from a team of the city of Tula “Arsenal” has recently commented on this subject in the media: “You can never make a good goalkeeper of a bad person”…
– Yes, this is true. It is a cliché, but goalkeepers are a separate caste. Many consider us a little crazy, but it is necessary to combine important human qualities to be a high-level goalkeeper, such as honesty, dedication and many others. Your good game instills confidence in your partners. The final frontier rests on you. If you can not stand, then the team will miss a goal.

– “Sibiryak” shares with “Dina” first line in the “scored goals” column. What points of their attack you need to pay special attention to in order to keep your goal secure?
– With all respect to the opponent and recognizing that they have a really great group of attack, I can not say our preparation is somehow special. “Gazprom” needs to base on our own capabilities. Yes, the coach tells me some details, we analyze actions of the players, but they are regular working moments typical for any match. What are the general expectations from the game against “Sibiryak”? We are gonna fight for the fans and for each other. It is of great importance for us to recover towards the fans for what happened in the cup against “Dina”.