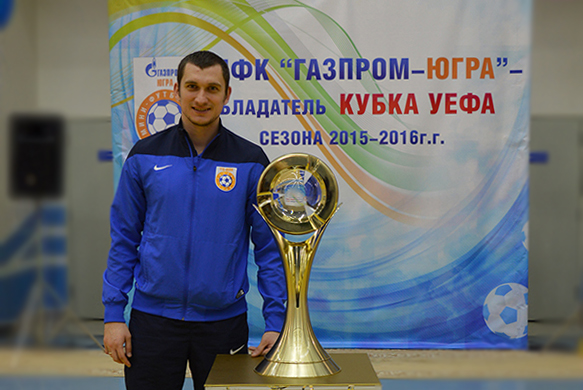 SLEMZIN: “GAZPROM-UGRA” SERIOUS OPPONENT FOR ALL

Our goalkeeper, Sergey Slemzin, told us about how he started playing futsal, why he became a goalkeeper and what emotions he felt after winning the UEFA Cup: – I came to futsal pretty late. When I was 17, after high school I came to Moscow to enter college. We had a futsal team at college, […]

Our goalkeeper, Sergey Slemzin, told us about how he started playing futsal, why he became a goalkeeper and what emotions he felt after winning the UEFA Cup:

– I came to futsal pretty late. When I was 17, after high school I came to Moscow to enter college. We had a futsal team at college, so I started training with them. That’s how I entered futsal. My first team was the Moscow “Spartak”. At that moment, when I was at college, It was something unreachable for me to play for a professional club. I remember, when I came to my first team, how I was sitting in the changing room with my mouth open. It was totally a different world for me when you pass from a children’s futsal team into a professional one, to play with famous players.

– Why did you choose the goalkeeper position?
– As a child, like everyone, I wanted to play on the pitch, scoring goals. When I was a kid and played football, other elder guys sent to into the gate all the time. Almost for a year I played as a goalkeeper, being forced I can say, but then I liked the position and I decided not to change it.

– Does a futsal goalkeeper have boring games? When your team most of the times play on the opponent’s half of the field.
– No, this is very misleading, because in such games, on the contrary, you need triple concentration, because when the team has an advantage, any mistake can be of high cost for everybody. It is never boring and easy for a goalkeeper, no matter what opponent you are playing against.

– How is your regular training day different from the routine of other players?
– We have separate Goalkeeper training two or three times a week, where we work with our goalkeepers’ coach. The rest of the workout, we do together as a team.

– How have you come to “Gazprom-UGRA”?
– I’ve been in the team for a pretty long time, since the winter of 2009. I was invited after the U21 European Youth Championships in which I participated. When I just came to “Gazprom”, I could not stay for a long time, at first I had an injury, then I spent some time on loan, where I acquired some experience.

– What can you say about the Ugra fans?
– They are very friendly and always communicate with us. Many guys who have been in the team for a long time, have friends among the fans.
The way the fans support us in Yugorsk is different: the people here are not used to throw out big emotions, but we know that our fans support us with all their heart and soul, accompany their favorite team to long journeys, and it costs a lot.

– What game for “Gazprom-UGRA” was the most memorable for you?
– This is definitely the UEFA Cup final and semi-final. We had a very tough moment in the semi-final, when Zviad was removed and I replaced him. At that point I didn’t even have time to worry, I will never forget this match. And, of course, the final was the most memorable moment, I wish everyone could have such a game in his or her career.

– Can you remember of any other memorable and significant moments?
– All our significant achievements such as the first Cup of Russia when for the first time I felt the joy of victory with our team, fans and friends. Our first championship in 2015, it is impossible to forget it all.

– Your wife and mother are present on your games and always very worried about you. Do you feel this support?
– Yes, it is always important when your friends and family are worried about you, they pass all these moments through them, all the difficulties. This is true not only for my wife, my mother, but also for all the wives and relatives of all our players. It is very valuable to us that our families are close friends and all together give us that support. They invest a considerable percentage into the success of our team.

– Who is your friend in the team?
– We do not have this thing, like someone is your friend and someone is not. We are truly one team, stay in touch all the time, visit each other, go together on vacation or just go out together.

– Can you remember any interesting moment that happened with the team while away?
– When we went to Tula for a preseason, we went out to play paintball. We divided into two teams, one team had coaching staff and players, the second consisted only of players. So during the game, the other team began firing on the coaching staff and at that moment point the players in their team started shooting at them either. Of course, it was just a couple shots, but it was very funny, everyone laughed and no one was offended.

– Let’s talk about one of the main issues, the UEFA Cup. You went to Croatia for the elite as the current title holder. Does it affect somehow your emotional readiness?
– Within the team during the training process it didn’t affect us in any way. The fact of being a title holder itself means that you need to keep the brand. Now “Gazprom-Ugra” is a serious opponent for everyone, so we feel this emotional burden, which is completely different from the one we felt a year ago, when no one even took us seriously in the early stages of the Cup. Now we understand that it’s different, and it is not possible to relax even for a second.

– Did you keep it in mind that because of your status you had to to pass on?
– We know we are expected these victories, our management, coaching staff, close friends, fans. Our level allows us to be one of the best clubs and we just need to do our job and prove that we have the right to hold the title of the European Champion.

– You already have something to compare, could you tell us, please, whether the emotions, when you passed to the Final Four last year for the first time, differ from the emotions you had this year?
– From my experience I can say they don’t differ. This time, as a year ago, the outcome will be decided in the last game. The emotions from the victory, from reaching the final were the same. They are genuine and it seems to me that you can never have such victories enough.

– Could you share with us your dearest wishes on the New Year’s Eve?
– First of all I wish that all my friends and relatives were healthy, it is the greatest happiness for everyone. And in terms of futsal wishes, I wish that we kept winning, and the fulfillment of this wish depends on us.
I want to wish our fans a Happy New Year. I wish that all hardships stayed in the passing year and you could take all the good to the new one and multiply it. I wish that everyone could decide what is important to him or her and Santa will bring it in his bag in the New Year.

The victory of older boys over peers from Ukhta 4-2