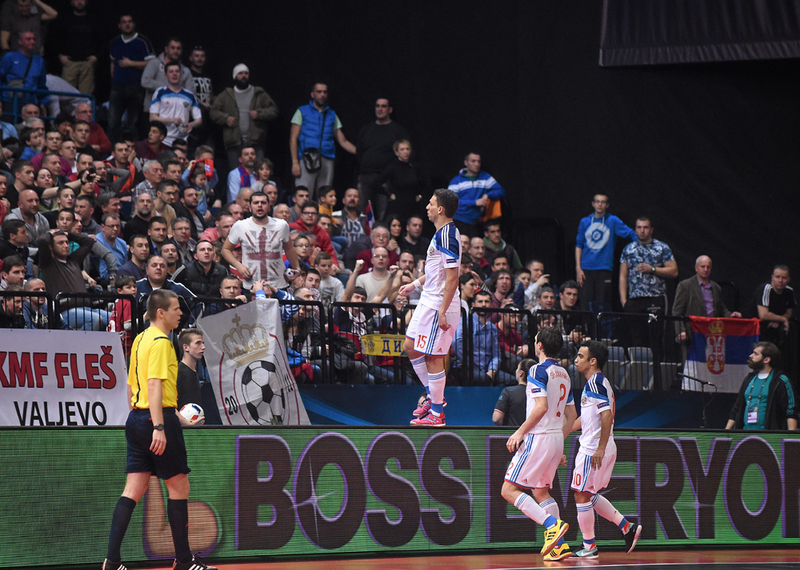 In extra time the Russian team broke the resistance of the Serbs (3-2) and for the third time in a row got into the final of the European Championship.   After a very cautious start from both sides the Russian team gradually began to demonstrate the advantage. The long distance shot by Shayahmetov and the […]

In extra time the Russian team broke the resistance of the Serbs (3-2) and for the third time in a row got into the final of the European Championship.

After a very cautious start from both sides the Russian team gradually began to demonstrate the advantage. The long distance shot by Shayahmetov and the rebound made Aksentievich take the ball out of the net, then Abramov hit the ball above the gate after the pass from the throw-in. On the 12th minute, Atsa Kovachevich took a timeout, but immediately after the resumption of the game the hosts had a real problem: they made a mistake in their half. Davydov entered the fight and addressed the ball to Lima: he made the goalkeeper fall on the floor and pushed the charge into the net.

After a missed goal the Russian national team went through unpleasant moments: Abramov and Romulo carried the ball from the goal line after the adversary played out a free ball at six meters, and then Raychevich missed the right moment – caught the pass in the center of the penalty area, but lost the battle to Gustavo. The first half confirmed the faithfulness of the words that the winner is the one who makes fewer mistakes.

The second half could be a real gem of the tournament: the Serbs threw all their forces and skills to correct the situation and the team of Atsa Kovachevich have enough of the both. But, unfortunately, the 20 minutes of retaliation turned into a theater of the British judge, who removed Eder Lima for two yellow cards, gave five fouls to our team, set a free kick from the goal line on the last minute and miraculously cancelled sixth foul. The period until the 30th minute was a difficult ordeal. The main goalkeeper of the Russian team got his elbow injured and for the first time in the tournament under the monstrous pressure of the crowd came out a young goalkeeper, Sergei Vikulov. He saved the team from Rakich hit the ball ​​into the bottom corner from the defender, but soon he was powerless against the strong shot by Kotsich into the top corner.

After the injection Gustavo returned to the game: his injury almost influenced the score of the game – when in extra time, he could hardly keep the ball in his hands and managed to stop it only at the goal line. But despite the pain, our goalkeeper was one of the main creators of this victory. On the 33th minute Sergei Abramov scored a miraculous goal: he caught the ball over Kotsich and pushed it past Aksentievich into the top corner. And then everything got mixed: the removal of Eder Lima, the goal of the Serbs in the majority, new attempts of the judges to not allow Russia to play in the final, the last one of which was eventually canceled. It remains unknown why the English judge Birkett set the sixth foul and what made him to cancel it later. The result is 2 to 2 after the main 40 minutes. In extra time our team left no chances to the adversary.

The decisive goal in the 44th minute was scored from a standard: in this tournament they became a real asset of the Russian team. At the throw-in kick Robinho passed into the center of the penalty area, where Romulus made the decisive touch.

Press-service of the futsal union of Russia