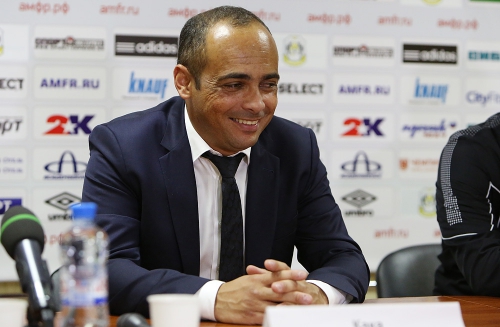 Today the FC “Gazprom-UGRA” defeated the FC “Tyumen” with the score 4-2 and now is leading the round with the score 2-1.
Coaches and players summed up the results of the meeting.

Kaka, head coach of the FC “Gazprom-UGRA”:
– The first half was similar to the second match in Yugorsk, in which we dominated and had a lot of chances, but the final score was not in our favor. Thanks to the guys, they could’ve stayed patient, insisted, kept believing in the victory and I think, it was the key moment today. Today it was a game between two high skilful games, which always play till the end and never give up. It was a good, entertaining, beautiful game, which gave a lot of emotions both to the fans and to the players themselves. Hopefully tomorrow it will be a spectacular game either.

Evgeniy Osintsev, head coach of the FC “Tyumen”:
– Thought are different, I need to watch the game again, to analyze it. Today we totally unprepared to the pressure. I had an impression that the guys saw the ball for the first time, made risky passes. It was easy for the opponent to play against us. You can’t act this way with such a team, because at some point the will punish you. Sometimes we wanted to play more actively, but apparently the guys automatically retreated to our half again and again. The guests could’ve scored more in the first half yet, they had a lot of chances, but Sergey Loginov showed a very beautiful game. After “Gazprom” drew the score, we began to create good moments. As soon as we started to put pressure, it began to yield results. But what you can’t take away from the opposing team are their skills. We still lack this self-possession and skills. Those chances we created, we had to finalize. Where we had to shoot and take responsibility, we began to look for a partner to pass the ball. We still have problems with this psychological component. As soon as we change our psychology, we will play at the same level with “Dynamo” and “Gazprom-UGRA”. Everything lies in our heads. We must believe in ourselves, in our team and in our partners. I think everyone liked the match today. But the key role was the red card. It was very difficult to resist this team. We tried to change the situation, but we lacked composure.

Thanks a lot to the fans, they supported us very actively today. When the bleachers were loud, the guys had a second wind. Many thanks to them! We’ve lost the fight, but not the war.

Vladislav Shayahmetov, player of the FC “Gazprom-UGRA”:
– It is always a pleasure to play with such fans. If you imagine yourself as a fan, it’s a great feeling. A lot of spectators have come today, Tyumen loves this team and support it. I would like to thank Tyumen citizens for supporting their team this way. Speaking of the game, it was evident: the hosts chose defensive tactics and were waiting for our mistakes. It gave results until some point of the game. We lost concentration at the beginning of the match, did not score a few times, became nervous and were immediately punished. It’s good that finally we could’ve handled it and won. Thanks to “Tyumen” for showing such a tight round, fighting and not giving up.

Denis Abishev, player of the FC “Tyumen”:
– Today’s game is divided into segments. We didn’t start our best way but our goalkeeper played well, it helped us out a lot. Then we scored a goal and started feeling much more relieved. In the second half, when the score was equal, we saw a “transmission game”. The game was rolling untill a goal. We had some good counterattacks but didn’t succed in finalizing them. The guests carried out our red card and scored being in the majority. We started playing with an extra man, created good chances but at the right time Zviad Kupatadze demonstrated his skills. Tomorrow it will be a new game, we have nothing to lose, we’re playing at home, we can not give up, we need to get united.

DANIL DAVIDOV: “FIRST OF THREE CUP IS OURS”