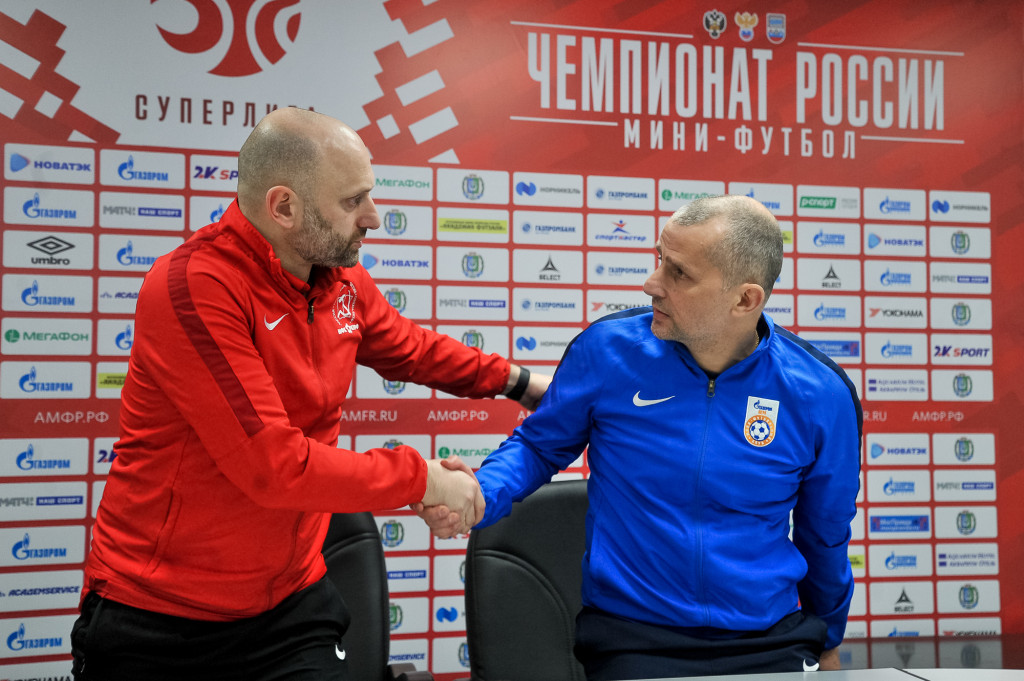 Press conference following the 17th round

Our head coach Temur Alekberov: A very interesting play-off game. It is clear that in our situation, when in one game you can be both in the first and in fourth place, the price of the game was the highest! We had to make very difficult decisions. For us, the game was decomposed into segments: […]

A very interesting play-off game. It is clear that in our situation, when in one game you can be both in the first and in fourth place, the price of the game was the highest! We had to make very difficult decisions. For us, the game was decomposed into segments: we started very well on playing the game, then there was a 2-minute segment with missed balls, then we leveled and we had a very good second half of the first half – we scored very important, very necessary goals. In the second half, it was very difficult for us to play four-to-five, this time experienced players were just in the right positions, they played very well. Although the challenge was the hardest, the rival was masterful and very good at playing five-by-four. The most important thing is that not the first time in the last games, the players showed character, fortitude, skill, experience and played with all their might. I want to thank the supporters for very good support, this is really very important help. Probably this is the biggest and only advantage that we had before this tour – we played at home. I also want to thank the team for the game, for their character, endurance. For us, the championship is over, now being treated, to recover, the guys deserve a good rest. I am very pleased to look at this team!

Hard game. The first half was very entertaining, very dynamic, very busy, with goals, with moments, the game is in one goal, then the other. When the score was 6-2, it was clear that KPRF did not succeed, the coaching staff decided to release the fifth field and this destroyed the entire futsal. I do not know who enjoys such games, the supporters, I think, are also not very happy. We played, defended, played 30 minutes in defense. Both we, and KPRF have well worked “four by five” and “five by four” before playoff games. Everything that is not prohibited is allowed, they chose this strategy, and we worked.

It is clear that we can not have good emotions now, because we came for those points that would allow us to remain the leaders of the championship to the stage of the playoffs, but we did not succeed and a great merit in this is definitely a rival who showed how to cling for a specific result. Maybe at some moments we failed at the game, of course there were gross mistakes today, which did not allow us to play the score. Congratulations on winning to Gazprom! We do not give up, now there will be a pause that we need, it will give us the opportunity to make out what globally prevents us from playing decisive games, because there is another tour ahead with Sibiryak and the playoffs. It is clear that zero points in the tour – can not be good, but there is no panic. I believe in the team and I am sure that we can get out of this state, that the psychological one was created when we failed the tour. I really hope that we will come back stronger.