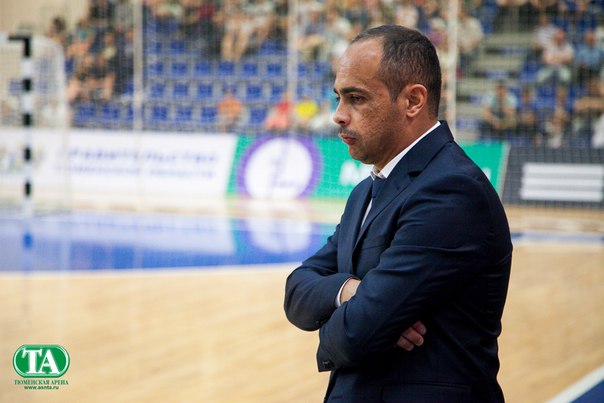 The FC “Gazprom-UGRA” in the fourth semifinal match gets a landslide victory over the hosts “Tyumen” with the score 5-1 and goes to the final. Head coaches of the teams and players about today’s match: Evgeniy Osintsev, head coach of the FC “Tyumen”: – Today’s game in general, according to what we were doing on […]

The FC “Gazprom-UGRA” in the fourth semifinal match gets a landslide victory over the hosts “Tyumen” with the score 5-1 and goes to the final. Head coaches of the teams and players about today’s match:

Evgeniy Osintsev, head coach of the FC “Tyumen”:
– Today’s game in general, according to what we were doing on the pitch, except for the first five minutes, was not bad. The boys realized that they also can play football. The only thing is, of course, we still don’t carry out our chances. In the first half we had moments, we seized the initiative, but we did only two shots on target. We need to draw conclusions, to keep working on this component. As for the psychological barrier we have overcome it. The guys realized that it is possible to play against “Dynamo” and “Gazprom-UGRA”. They are also regular humans as we are. This round a lesson for us, great experience. It was a pleasure to play against such an opponent and we have a lot to learn from them. I wish good luck to “Gazprom” in the final. And we need to gather forces now, we did played the maximum of it every match, the players dedicated themselves 200%, they are great, they are real men. The main conclusion of this round is that the guys believed in themselves. We are to fight for bronze, we need to recover our wounds, it is still unclear how many healthy people we have. But no matter how many we are left, we will fight for each other.

Kaka, head coach of the FC “Gazprom-UGRA”:
– Today’s match was to our success. Very good match, we missed only one goal. We returned to our average scored balls number. It is very pleasant to see that closer to the finals we gained that confidence back through good games. As we had expected, we had a slight decline after the UEFA Cup and waited for our game to be back closer to the final of the national championship. And so it happened. It is very good.

Once again we reached the final and once again we are to play against “Dynamo”. Now we have a more experienced team, we have good experience in final games. We know what it means to be the champion, we will use the experience that we had gained. I want to say thanks to the guys, the fact that we finally could get over the round is completely their merit. Many thanks to our fans who came here. They were in the minority, but we heard them. I really wish they supported us the same way at home. We will really need their support.

I wish success to “Tyumen” in the fight for the third place.

Miodrag Aksentievich goalkeeper of the FC “Tyumen”:
– Yesterday, when we lost the third match I saw at the hotel the guys were really devastated. This is a huge plus to a young team. They got very upset that they lost the best team in Europe. It’s great, because our players strive for the highest goals. Maybe this year we have not reached the final, but we still have the future. Objectively, the opponent looked better in the round. “Gazprom-UGRA” has a good bench, on which there are very skillful players. Now we need to win what we deserve, it is the bronze medal. We went through the whole championship smoothly, finished the regular cycle in third place, and now we can not give up. Now for me it is also huge success to win the bronze medal. I count with the help of our fans, because our situation is not easy: we have are injured players and yellow cards. I really hope that we will recover and win at least bronze medals this year and will reach the finals next season.

Ivan Signev, player of the FC “Gazprom-UGRA”:
– “Tyumen” is growing into a leading Russian club. I hope that soon the Siberians will be in the final of the Russian Cup or the championships. They have all the qualities needed for that. As for the round: of course, the team of Evgeniy Osintsev is very strong physically. We also spent a lot of energy with the guys but it wasn’t easy for them either. It’s been a long time I have not seen such concentration in the eyes of our players before today’s game. The guys were calm and confident which made it possible to show very good football.