Results of the 3rd round of the kids Championship 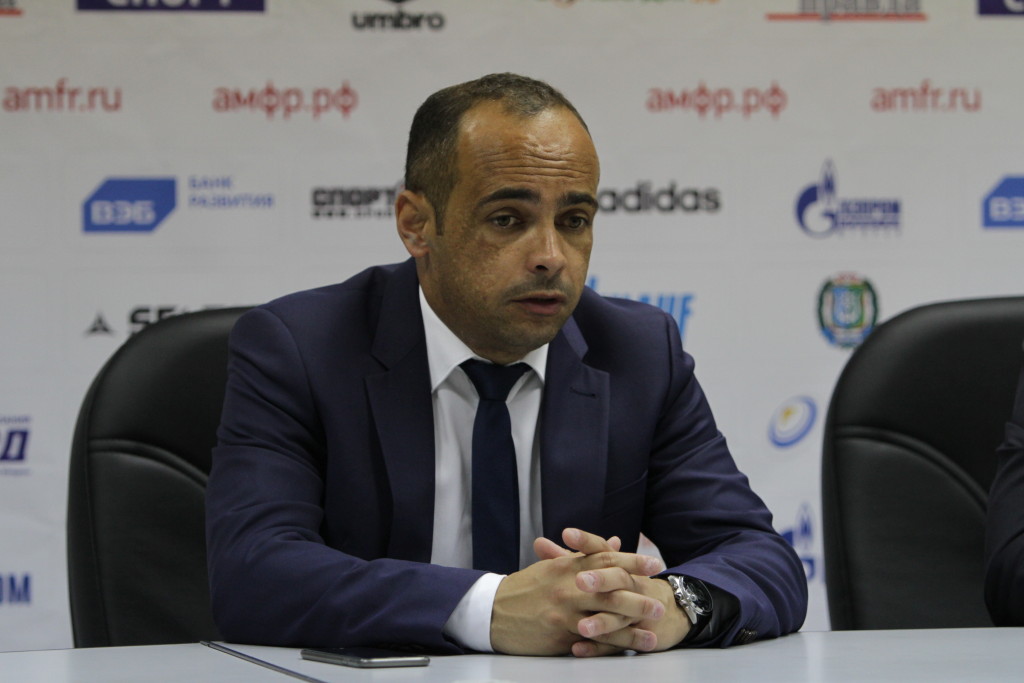 Kaka (head coach of the FC “Gazprom-UGRA”): – Congratulations to “Dynamo” with the championship. I also want to thank all my players for the very successful season. They didn’t only win two titles, but were able to return to the championship final this intrigue, which seemed to have died. We played the fifth leg very […]

Kaka (head coach of the FC “Gazprom-UGRA”):
– Congratulations to “Dynamo” with the championship. I also want to thank all my players for the very successful season. They didn’t only win two titles, but were able to return to the championship final this intrigue, which seemed to have died. We played the fifth leg very decently. There were moments when the team got lost. Unfortunately, we played in the minority twice. People should act more careful. The thing that the opponent goalkeeper did in front of our wives was improper. Today you win, but tomorrow you lose. I wish him that his head always were in place. Life is not only futsal, it is not only 40×20, but it is much wider than that.

– Which point was decisive in the final round?
– Patience. We lacked right decisions at the end in terms of psychology. We shouldn’t have succumbed to the provocations. Before those two suspensions the game was in our favor, but after it only luck could help us to win. I do not remember when in my career I saw a three-against-two game. This is not futsal.

– What can you say to the supporters?
– Only words of gratitude. Our fans came from far away and during all the match supported our team. They and all the relatives of our players deserve only the most positive words. We heard them all the time and wanted to give them victory. Unfortunately, it did not happen. I apologize to the supporters, to the whole city of Yugorsk, which waited for victory.

– If you were offered the position of senior coach of the Russian national team, would you accept it?
– When this place is available, I will be happy to lead the national Russian team and will be proud of it. Today this place is occupied by a highly qualified specialist, a man whom I respect, it is Sergey Skorovitch, I’m saying I do not claim to the position. I have a contract with “Gazprom” and I want to achieve new heights with the club, so I keep working here.

– On the one hand, your season can be called successful since you won two trophies, on the other you have missed the championship. How do you evaluate the past year?
– Today we lost, but we could’ve won either. Despite this, my final opinion would not have changed. Yes, we wanted three trophies, but we looked very good today. We have no feeling of resentment, we were behind with the round score 0-2, but we lost only in fifth leg.

Temur Alekberov (head coach of the FC “Dynamo”):
– Coaches, who are still athletes deep inside, have moments of happiness. They pass quickly, but they do happen. For a player it is the first championship, the first UEFA Cup, the first Intercontinental Cup and the first victory at Euro! As a coach, my first medal was bronze, I had made a very long way to get it. Now I’m feeling very happy since the season turned out to be very difficult. We lost one trophy, the Cup of Russia, without even getting into the final, but I believe in the guys. I saw them every day, I saw that they were ready to win.

The final was very hard, especially from the point of view of psychology. Winning 2-0, we allowed to make it 2-2 and then it was the opponent who had the superiority. In general, I’m happy. I’m very happy for the supporters, for the guys, for their families, who have been always with us over the past days. I am happy that the guys can come home and their children will be proud of their fathers. Only titles can make “Dynamo” players happy, because they are all great masters, so none of them can stay long without a title. I am happy that we brought a second star to the club. We’ve worked a lot. Today all the work of the year depended on small moments only, not even on the game in total, you hit the bar and everything changes. Now you’re the winner, but one small thing could turn everything different.

Lots of happiness, emptiness and fatigue. I am glad to see the happy faces of the players in the changing room. I saw how they worked and I knew we had a good team.

– Could you comment on the game, please?
– Today, we used tactics that had never used before. We did not have clear quarters. We used two pairs of defenders and three pairs of offensive players. We tried to act quickly and maintain a high pace. We used different substitutions. I think that tactically we played very well. We didn’t miss any goal in the regular game. The first one was from “set-pieces” and the second one with an extra man. Our defense was very confident today, especially taking into account the fact that Zamtaradze was in the goal, for whom it was not easy, because throughout the season he had little game practice. We lost, then led for a long period of time, but at the end every moment had intrigue. For some time we were wining, but the opponent took the game to overtime, we gave way and managed to catch up. Today’s game had everything, a three-against-two game, which is rare for futsal. In these five games we have shown futsal in all its glory, including bad moments with fights. I am very pleased that today’s game was broadcast on the big “Match” TV channel. For me it was a successful match. As for emotions and skills level it was a real final between two strong teams.

– Many people say that it is a victory of Temur Alekberov, who beat Kaka.
– I will never say so. Everything was so “on the brink”. If it were the opponent to score and not us, we would be talking in a different way now. I do not think about it. We had a certain tactical approach, which we tried to adhere to, and we managed to do it. It was important for us to change, because we played without Gustavo and Fernandinho. Tactically, it was necessary to play well with such a fast and skillful team as “Gazprom”. We hid our disadvantages and compensate them at the expense of other elements. I’ll never judge my work, since I always treat it critically.

– How did the factor of the hard road influence the team?
– Only the fact that the Russian Futsal Association heard our club, compensated all the difficulties of the road from Yugorsk. If we played on the 8th, we would not have had time to counter the opponent. It was a disaster! It was very difficult to go to Khanty from Yugorsk by two mini-buses. Fortunately, this day was enough. That is why we chose this tactic and from the first minute almost all the players were involved, except Ildar Nugumanov. We had enough time to recover. For example, Romulo played almost 30 minutes and at the same time he worked at every moment. Winning 2-0 and then making it 2-2, it was psychologically difficult. Even for me it was not easy to find emotions, though I tried very hard. It was clear that we couldn’t give up. We had enough time and tactically we could distribute work among the players. I really wanted to play the way we could hide our problematic things related to injuries and fatigue. We made it. We had no failures.