The Russians are in the playoffs of the Youth Olympic Games! 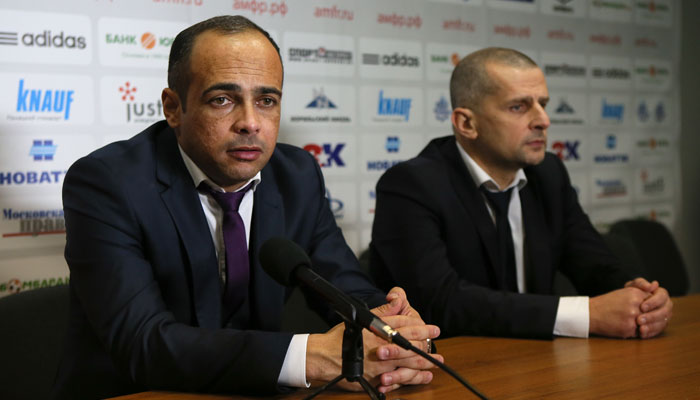 Head coaches and players of the teams comment on the 6th round first game of the Super League, in which the FC “Gazprom-UGRA” wins with the score of 4-2. Kaka, head coach of the FC “Gazprom-UGRA”: – As we expected, today both teams showed a very beautiful game to all fans. Two world-class teams demonstrated […]

Head coaches and players of the teams comment on the 6th round first game of the Super League, in which the FC “Gazprom-UGRA” wins with the score of 4-2.

Kaka, head coach of the FC “Gazprom-UGRA”:
– As we expected, today both teams showed a very beautiful game to all fans. Two world-class teams demonstrated all the strength. Today, our opponent chose more attacking futsal, we chose it more defensive. Our game plan helped us to achieve the result. It’s two different styles with the same capabilities. This victory is totally the merit of the players, that believed in success and acted disciplined since the first to the last minute.

Zviad Kupatadze, goalkeeper of the FC “Gazprom-UGRA”:
– As always, the game against “Dynamo” was not easy. You can’t enter the pitch not ready even a little bit, so everyone gives his all. The victory is very important for us. This season was kinda crumpled, we are still looking for our game, and today’s victory gives us strength and confidence that we are moving in the right direction. This is a good chance to test our strength before the UEFA Cup both for us and for the opponent and perform successfully in it, then meet each other in the Final Four.

Temur Alekberov, head coach of the FC “Dynamo”:
– The fact that “Gazprom” played defensively with counterattacks wasn’t a surprise to us. In today’s game, the defense played better than the attack. But, after all, the fate of the match was decided, as it often happens in such games, with dead ball situations. The opponent scored a little bit more, we scored a little bit less. Indeed, the game with equal chances. We constantly had to break down the defense and attack. We had opportunities to equal the situation not only by the game itself but by the score either. But today the team of “Gazprom” was more exact in the performance of their tactical plan, so the victory came to them. We will rest and prepare for tomorrow’s game.

Robinho, player of the FC “Dynamo”:
– I think it will be no surprise to anyone saying that the match between “Dynamo” and “Gazprom-UGRA” is always a confrontation with a capital letter. Today’s game was another confirmation to that. We proved it on the pitch. For us, the fact that “Gazprom” was constantly leading by the score was a break. The opponent comes forward, we draw and then “Gazprom” once again scores a goal, it all deprived us of control of the game. Now we just have to analyze our mistakes, shortcomings, to see what went wrong. Time is short, but tomorrow we will try to fix everything.