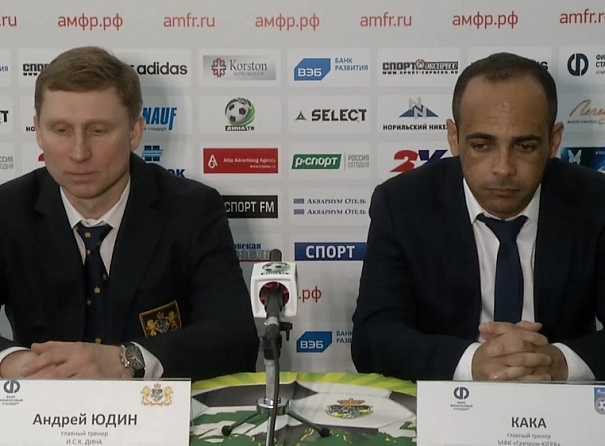 Head coach of the FC “Gazprom-UGRA”, Kaka about the victory in the SC “Kvant”: — I liked the fact that our players took this match very professionally, showed their level and were very respectful to the rival: the former champion “Dina” deserves this respect. Today we’ve had all the players and thus all the opportunities […]

Head coach of the FC “Gazprom-UGRA”, Kaka about the victory in the SC “Kvant”:
— I liked the fact that our players took this match very professionally, showed their level and were very respectful to the rival: the former champion “Dina” deserves this respect.

Today we’ve had all the players and thus all the opportunities to vary the game, making it more intense, I think, it was due to this fact that we have conquered such a result. It was not easy to play, because pretty soon we have the most important matches in the history of our club. Concentration was law, players thought about three places at the same time: here, Yekaterinburg (“Dynamo” vs “Sinara”) and the UEFA Cup. But the guys could get it, and I am grateful to them for that. Now we need to switch to the other championship.

We have decided that Aleksandr Kopeikin, unfortunately, is not ready to play in the UEFA Cup yet. Today, we looked more but there were few chances that he would be able to help the team: the level he showed in the last time is not his level. It is our captain, he has do e a lot for this club, we value and respect it and we believe that he will help us in the playoffs. He is flying with us to Spain but only to encourage the guys to help and to suggest his ideas which is to create a good atmosphere in the team.

Head coach of the I.S.C “Dina” Andrey Yudin about the game:
— Objectively, “Gazprom-UGRA” was stronger in today’s match. We were able to cling to the game: in the first half we had some good counterattacks, which probably could be finalized. But, unfortunately, we missed very fast balls — “Gazprom” started feeling free and caught up their game.

Our young players who, maybe, are not the leaders of the team, received a good match practice today and I think it is a big advantage. The team showed character, today we fought, the task was to try not give up at least functionally in the fight and in this regard, the players of “Gazprom”, I repeat, were stronger.

We realize that soon we will have to play with this team in the playoffs, we will have our leaders back, who are not with us now, so we will correct our game and we still have time for that. I think it is going to be more difficult for “Gazprom” to play with us in the future games. I wish “Gazprom-UGRA” a successful tournament, we will support them and preoccupy for them in the UEFA Cup.

It makes no sense to compare with which team it is better to play in the playoffs, let it be “Dynamo” or “Gazprom”, they are both very strong teams. We hope that our bench will be filled in with absent injured, thus we will represent another type of force and another team.

Press service of the I.S.C “Dina”