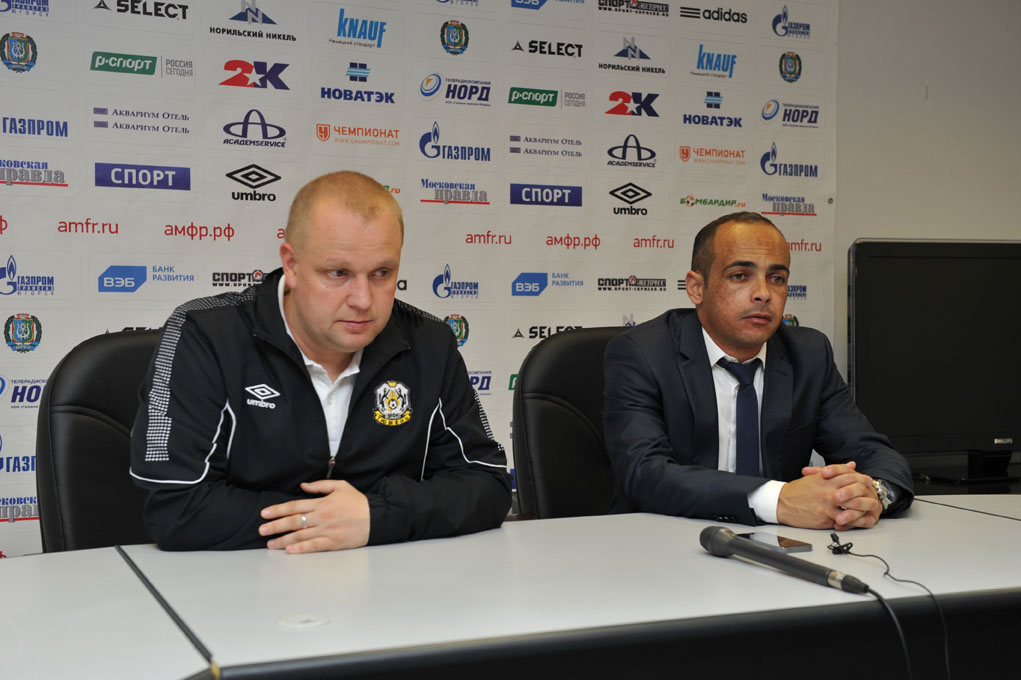 Andrey Sokolov, player of the FC “Tyumen”: At the beginning of the game, I think, we can point out several factors. The first one is a difficult road to Yugorsk, and we also were a bit nervous before the game. Tomorrow this nervousness will be away. Today we caught the game rhyme and tomorrow will […]

Andrey Sokolov, player of the FC “Tyumen”:
At the beginning of the game, I think, we can point out several factors. The first one is a difficult road to Yugorsk, and we also were a bit nervous before the game. Tomorrow this nervousness will be away. Today we caught the game rhyme and tomorrow will show a different game. Today Yugorsk finalized all their goalie moments and maybe even not all, but we did not use any of them, although we had ‘em either. Again, I hope that tomorrow everything will be different, and we are ready to win.

Ivan Chishkala, player of the FC “Gazprom-UGRA”:
Our own mistakes resulted in that nervous ending. In general we played secure and controlled the match, had the advantage. Yes there were dangerous moments next to our goal but the same happened next to our opponent’s goal either. At the end we missed goals and, therefore, the ending turned out to be tense. Let’s wait and see what will happen tomorrow. We will watch today’s game and will choose proper attitude. Maybe tomorrow will be another “Gazprom”, and most likely another “Tyumen”, a new game is a new story.

Evgeniy Osintsev, head coach of the FC “Tyumen”:
We really showed a very poor positioning game, created a lot of chances for “Gazprom”, which we should’ve avoided. Yes, we must pay tribute to “Gazprom” since this is both the winner of the Cup, and the best team in Europe, so if we don’t change our game and do not analyze our mistakes, it will be very hard for us. As for the game itself, we could handle it and caught the rhyme at the end, but we lacked something, maybe it was time, maybe luck. We had small chances to transfer the game into over-time. The goals we missed today were ridiculous, especially the third and the fourth. Actually the first two from “set-pieces” were unnecessary either. We need quickly analyze the game and prepare for tomorrow’s game. No accident happened today, it is semi-finals and we have to move on. We need to forget this stage and enter the pitch positive and play again.

Kaka, head coach of the FC “Gazprom-UGRA”:
Semifinal of the Super League, and plus a derby, so we knew that the game would be difficult. We are playing against a team that sticks to forceful and fast, with which you can never relax and be satisfied with the result. Today, when at some point when we were leading we got used to the result and missed two goals, which we usually do not miss, thereby we gave the opponent a chance to return to the game. Then we missed a goal with an extra man, when the rival showed a very skillful game almost on one touch only. At the end we had to be patient, and I will always thank the players when they withstand such stress. They stood strong and could win. Tomorrow it will be a very hard game, we know that the opposing team wants to rob this victory here in Yugorsk, so we enter the pitch extremely motivated and focused and will try not to repeat the mistakes.