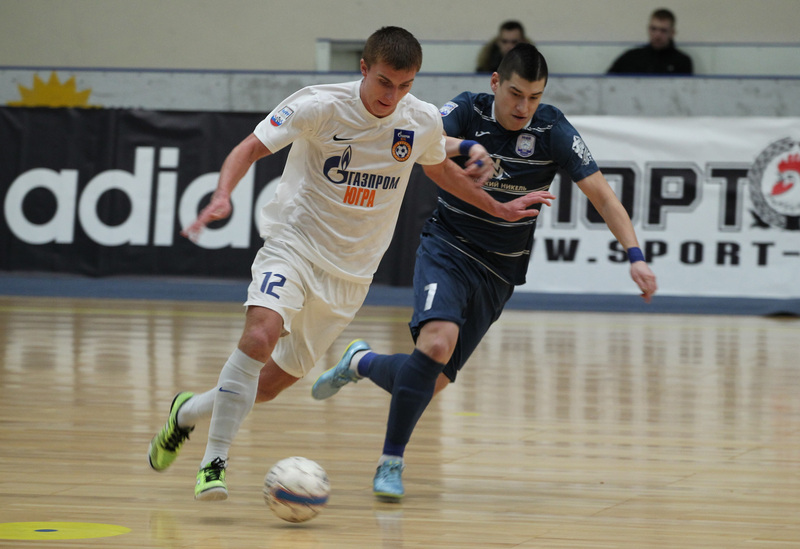 The first half of the return match of the 16th round in Norilsk between “Norilskiy Nikel” and “Gazprom-UGRA” ended with a peaceful outcome — 2 to 2, but after the interval Chishkala changed it all with his goal, 2 to 3.

The return game of the round in Norilsk, where “Norilskiy Nikel” hosted the actual champion FC “Gazprom-UGRA”, turned out to be quite stubborn. Although Chichkala could score the first goal on as soon as the third minute, the response was not long in coming. Literally following the goal in the squad of the “northerners” Aleksandr Davydov distinguished himself setting the score 1 to 1.

On the 16th minutes the team of Konstantin Maevskiy went ahead after the goal of Aleksey Filipov. However, the hosts couldn’t keep the advantage untill the interval — on the 24th minute Dmitry Lyskov scored draw. But the winning goal for “Gazprom-UGRA” was scored by Chishkala long before the final honk on the 27th minute, — 2 to 3. The fragile advantage wasn’t tumbled down and the team from Yugorsk left Norilsk with 6 points.

The manager of  “Gazprom-UGRA”, Kaka, and the player of the team, Ivan Chishkala, shared their opinion about the second game in Norilsk (3:2).

Manager of FC “Gazprom-UGRA”, Kaka:
— The game turned out to be very interesting as we had supposed. We told our players that the last score can’t influence our concentration, motivation, respect towards the adversary. We knew that today everything would be different, so it was. There were almost no moment next to our goal in the first goal, but we lost two goals anyway. The team of the adversary have improved a lot today, the game was much more emotional. I can’t say that we had more desire, but we definitely had more emotions. The local team made a lot of efforts, played till the end and we had a hard time playing. I’m pleased that we could get the victory in such a difficult game with the gap of only one goal. The game kept everyone in suspense until the very end. Congratulations to my players for being able to keep the pressure. It’s not that easy to to go away from here with 6 points.

Player of FC “Gazprom-UGRA”, Ivan Chishkala:
— It’s always a pleasure for me to play in Norilsk, this is my home. It’s a pleasure to play towards my fans, although they don’t support me. It’s a pleasure to get back to my native city. And the game was really hard today. It’s really difficult to play two days in a raw, even if you are highly prepared physically. And I don’t take into the account the huge interval we had because of the European championship. We tried and we won the game by a very narrow margin. The result is good – six points. We keep on preparing.