September 29 is the birthday of Aleksandr Cherniy!

UGRA STARTED WITH A BLOW OUT 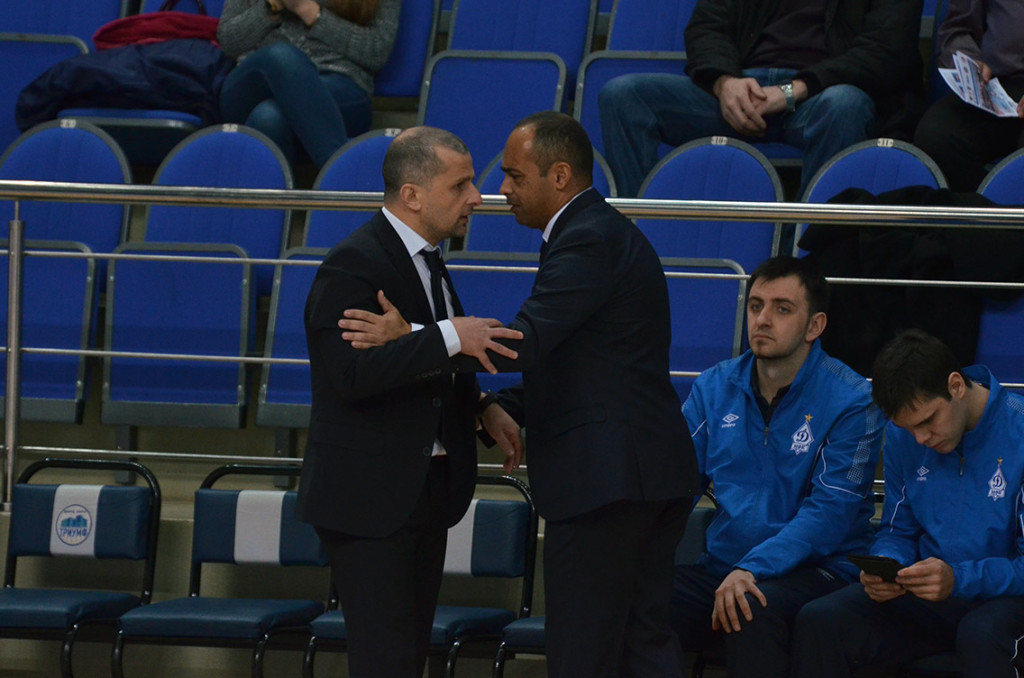 “DYNAMO” VS “GAZPROM-UGRA”. HEAD COACHES ABOUT THE UPCOMING FINAL

– Kaka, after winning the UEFA Cup, “Gazprom-UGRA” suffered some decline in the game, which affected the rounds against “Dina” and “Tyumen”. What is the situation like on the eve of the final?
– We really suffered some decline: both physical and moral, – answers Kaka, head coach of the FC “Gazprom-UGRA”. – I purposely consulted with coaches of teams which reached the decisive UEFA Cup games: this is inevitable. And in any case, whether you win or lose. Then a splash of negative or positive emotions empties you for a while. But, as I mentioned in one of the press conferences, we had predicted this situation, we were expecting hard times. The last two semi-final games against “Tyumen” showed that the team is going up, we are gaining our strengths again.

– It was really hard, taking into account the fact that during two playoff games “Gazprom” did not score any goals at all.
– This situation, of course, made us nervous. When you score to “Sibiryak” 9 goals in the final of the Cup, 5 goals to Portuguese “Benfica”, or 4 to Spanish “Inter” … And then the ball just does enter at all, of course it knocks off balance.

– It is a fourth consecutive Super League final in your beginning coaching career.  I think that the last one was really special: first, on the occasion of the victory, and second, by its intensity in all five matches. Have you defined for yourself what errors you can’t repeat?
– Of course, we did mistakes, even in the final we won. Before we did them not only during the playoffs, but even before it started. Then we gained experience, corrected many of them. If we talk about the last final, there also were some mistakes when we failed the fourth game at home, although we could had taken the trophy. It is also about the lack of experience. Now we have all this accumulated baggage, the championship title, we confidence in our abilities. But we need to use it properly. I know what we have to pay attention to firstly: it is attitude, motivation, it is respect for the opponent. Today, I am confident in my players and I know that they will give all the power to defeat a very strong club, which is “Dynamo”.

– It is a very important and may be a very hard question for you. It is been already announced that since next season Robinho will play in “Dynamo”…
– … I understand what you mean. I’ve known Robinho for a long time and I am sure he is a highly professional player. While he is a player of “Gazprom”, he will try to bring the highest benefit to this club. We will talk to him on the eve of the matches, but I am sure that I can count on him.

– Temur Sadraddinovich, it is a second time in your coaching carrier when you will participate in the Super League final. But can we compare this season in “Dynamo” with the 2010/11 season in “Sibiryak”?
– I think there is not much in common, – says Temur Alekberov, head coach of the FC “Dynamo”: The fact that “Dynamo” reached final is based on the club’s capabilities and traditionally high goals, this is a normal phenomenon and it is not any success yet. In “Sibiryak” it was very different: we built that team for 3 years, and, when we reached this key stage, we achieved the highest achievement in the history of the club. It was a complex and interesting way. So for myself, I do not compare these finals, the degree of responsibility is entirely different now.

– You mentioned the degree of responsibility. Now, perhaps, you’ve ben going through the period of highest pressure on you. How are you dealing with it and how are you working in such conditions?
– The responsibility is huge. But I knew very well what kind of club I was going work at. Thinking about difficulties in this situation is not the best choice. When I see that our team has been growing it calms me and I understand that the work we have done is not in vain. “Dynamo” is the first in the standings and we have missed the least goals, there are other positive trends. It means again that we show on a particular game and particular day everything we can, the outcome of the meeting will depend only on us. “Dynamo” has highly professional and experienced players who are well aware of where they are playing and why.

– When you participate in the playoffs, do you prefer to prepare for each specific game or in advance?
– We prepare for the closest game, because only this game will show us the direction we will have to move in.

– Do you keep in mind the fact that last season the final round between the same teams lasted for five games?
– I do not think about it. If you count the number of matches and now think of a hypothetical confrontation in the fifth one, for sure you won’t you reach it. There is the closest game and the second one, and after that you have to start from the factors that are currently impossible to predict: cards, injuries. It is important for me that at the moment all the players are ready and all of them correspond to the highest level.