ALIYEV: “CONFRONTATION” OF GAZPROM-UGRA “AND” TYUMEN” WILL BE IN THE HISTORY OF OUR FUTSAL” 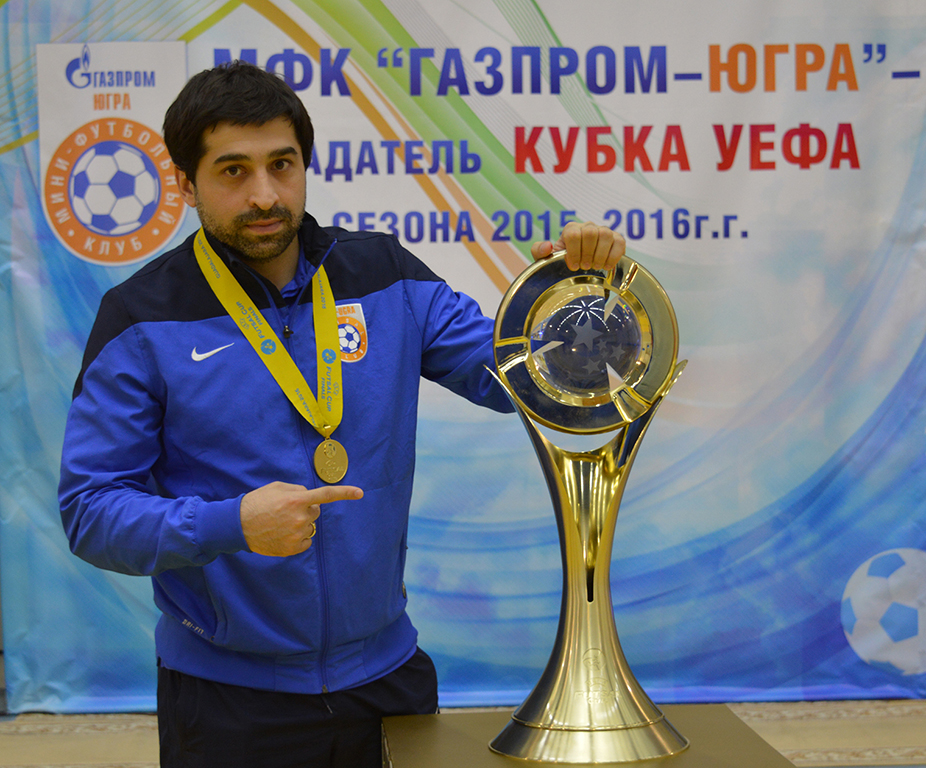 KUPATADZE: MY DREAM IS TO GET TO THE EUROPEAN CHAMPIONSHIP

Our goalkeeper Zviad Kupatadze talked about the way he got to “Gazprom-UGRA”, about his achievements in the national team of Georgia and objectives for 2017. – Let’s start with the most important question, how did you become a goalkeeper? Tell us how and where your career began. – At the beginning I played in the […]

Our goalkeeper Zviad Kupatadze talked about the way he got to “Gazprom-UGRA”, about his achievements in the national team of Georgia and objectives for 2017.

– Let’s start with the most important question, how did you become a goalkeeper? Tell us how and where your career began.
– At the beginning I played in the field as everyone. Then in a wonderful day in our youth team our goalkeeper got sick and I was forced into the goal, I started catching balls immediately and our coach saw a promising goalkeeper in me.
– Could you tell us, please, how did you come to “Gazprom-UGRA”.
– In the summer of 2004 when I played for “Tyumen”, I was invited to “Gazprom”, then the team was called “TTG-JAVA”. It was the first year when they decided that the team will move and base permanently in Moscow, I’ve been in the team since the very first day it moved to Moscow.

– You have scored 24 goals. Do you remember your very first goal in your professional career?
– I scored my first goal for the national team of Georgia, as far as I remember, against the Serbian team in the qualifying matches. I dribbled a few players and scored a very beautiful goal, unfortunately, there is no more recording with that goal, but I can tell you it is the most beautiful goal in my career, perhaps also because it is the first one.

– Did you expect to become the top scorer among goalkeepers in the Russian Super League then?
– No, I did not even think about this. It all happened quite recently, when three years ago I scored 7 goals in one season for “Gazprom-UGRA”. It brought me to the leading position.

– Let’s talk about the national team of Georgia. Could you, please, tell us why you couldn’t play for the team for such a long time?
– Firstly, they hadn’t paid enough attention to futsal in Georgia for a long time. Secondly, when I played for “Tyumen”, I was invited to the qualifying matches for the national team in Slovenia, but it turned out that I did not have time to return to the regular championship and they could expel me from the team because of that. In connection with this situation, the management of the Football Federation of Georgia (GFF) just said that I could choose myself what to do next, that’s how they expressed complete indifference towards my participation in the national team. In 2006, in order to avoid the limit of foreign players I needed to change citizenship.
Now everything has changed for the better, the way they treat futsal in Georgia, rules towards foreign players. When the GFF had a new president they started giving due attention to Futsal, started showing their desire to develop this sport in our country. And I decided to help our team. I decided to go back, since it also helps the team, grabs more attention when such a player with so many titles, winner of the UEFA Cup, playes in it. It attracts attention to Futsal as a whole. Now everything goes well, we are winning, and I understand that I made the right decision to come back.

– What was it like when you got to know you can play for the national team again?
– I was preoccupied about the result. I came to the team, everybody knows me there, everybody knows about all of my achievements, and I just had no right to show bad results. I believe that I have to take on considerable responsibility for the result of the whole team. But now that we have successfully passed the qualifying for Euro, I can say that everything is good, we have good guys in our team, everyone fights until the very end. In general, we have a very friendly team, we are all together going to one common goal.

– The team held three qualifying matches, two of them you played with zero goals against Israel (3-0) and Scotland (11-0) and besides, you scored goals in two matches. Could you, please, share with us your emotions from the scored goals?
– After the match I uploaded a photo in the Instagram, where I signed that after the goals I was not running but flying out of happiness. I forgot about everything at the moment, I can’t even explain the way it feels when 4000 people are watching you and supporting. It was unforgettable for me to end up a game like that.

– What is the most memorable goal in your career?
– There are several memorable goals important for the team, they are goals against our most principled opponents, such as “Dina”, “Dynamo”, “Kairat”. I remember it was quite long ago when I even scored a ten meters against “Dina”.

– What are your goals in 2017?
– At least I hope to repeat the same results of the last season with “Gazprom-UGRA”. As a maximum I’d like to win all the three titles. As for the national team of Georgia, my dream is to get to the European Championship and this is quite possible to make it come true.