“DINA” VS “GAZPROM-UGRA”. FORTH LEG 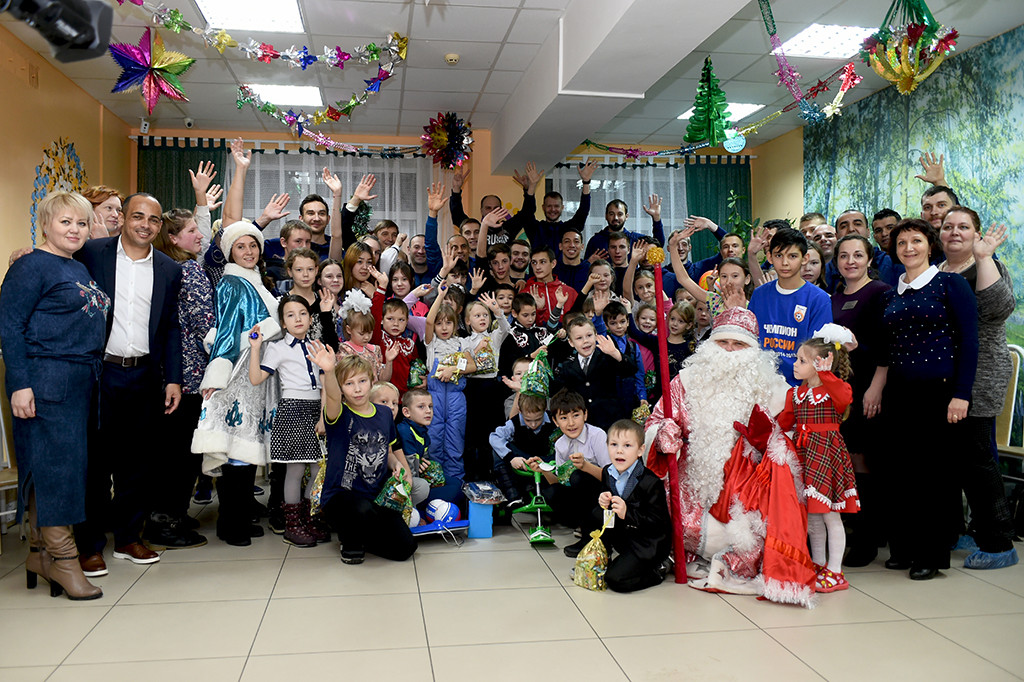 Our players wished a happy new year to the kids of the children center “Bereginya” in the town of Pionersky. The friendship of athletes and children who found themselves without parental care began last year and every meeting becomes a holiday for the toddlers and teenagers. This is the first New Year’s party at Bereginya. […]

Our players wished a happy new year to the kids of the children center “Bereginya” in the town of Pionersky. The friendship of athletes and children who found themselves without parental care began last year and every meeting becomes a holiday for the toddlers and teenagers.

This is the first New Year’s party at Bereginya. There will be several more, but this meeting is special. Not every day you can just like that, easily sit in the company of the world’s futsal stars. In this case, the responsibility for the verses learned for the holiday increases, because it is not only to Santa Claus whom they tell them, but also the to distinguished guests. Gifts were not long in coming: snowmobiles, balls and other sports equipment are now at the disposal of the center’s wards. Well, the highlight of the program was a joint dance of children and guests.

VALERY LINNIKOV, Executive Director of the FC Gazprom-UGRA:
-It is twice pleasant that this meeting takes place on the eve of the New Year, and we have the opportunity to wish you a happy holiday.

KAKA, head coach of the FC Gazprom-UGRA:
-To ensure that your faces are always smiling, so that you are always healthy and happy. To the next year was better for you.

For the first time the players visited the Bereginya center last year, since then they have been here more than once, but more often the children themselves came to Yugorsk at the invitation of the club. Last week, the Bereginya wards supported our team in the match against Progress. During the visit to Bereginya, the FC Gazprom-Ugra had to play by local rules, mostly with hands. Athletes sculpted, painted, glued, in general, were one creative team with children. While some were engaged in New Year’s handicrafts, others played chess on push-ups. The children had an excursion for the guests. They showed how they live, they told what they are interested in. Do not forget about autographs.

Zviad KUPATADZE player of the FC Gazprom-UGRA:
-We went to visit them in summer, and then the children came to our matches. Every time we took pictures together and we know that they support us. To give children joy is in the noblest cause on earth.

Futsal players admitted that they do not consider gifts the main purpose of such visits. The main thing is attention. Having met children a year ago, the guests were interested in how the Bereginya children live today.
Over the past ten years, no child has left here for an actual orphanage. They returned either to parents who took the path of correction, or to new families. And all this thanks to the efforts of the staff, volunteers and mentors, to whom now can also be referred the players of the club Gazprom-UGRA.

Look for the photos in the site’s gallery.

September 29 is the birthday of Sergey Slemzin

“SIBERIAK” IS BLOWN OUT IN NOVOSIBIRSK