“It was very important to play today’s match with confidence” 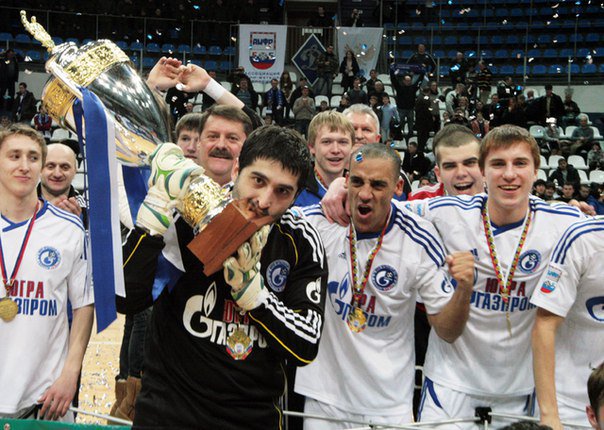 ZVIAD KUPATADZE: “IN 25 YEARS WE BECOME ONE OF THE BEST IN EUROPE AND IN RUSSIA”

On the eve of the anniversary of the FC “Gazprom-UGRA”, goalkeeper Zviad Kupatadze recalled the most significant and memorable moments in the history of the club: – Gazprom-UGRA is a team that has always strived to become a leader both in Russia and in Europe. For 25 years we have become one of the best […]

On the eve of the anniversary of the FC “Gazprom-UGRA”, goalkeeper Zviad Kupatadze recalled the most significant and memorable moments in the history of the club:

– Gazprom-UGRA is a team that has always strived to become a leader both in Russia and in Europe. For 25 years we have become one of the best teams in Europe and in Russia.
I remember how 14 years ago, when I first came to Gazprom, we fought for the fifth place, then for the third, step by step moving towards becoming the main favorite of the Russian championship. The anniversary of Gazprom-UGRA, the club I’ve been in for almost 14 years, is like the anniversary of a family member for me, and I want to celebrate this date with new trophies.

– What should the team aim for the next 25 years?
– You should always set maximum goals. The task for the next 25 years is to become the third most titled team in the history of Russian futsal. We all can name some clubs, like ten-time champions of the country, and Gazprom should at least catch up with them, or at the most, overtake leaders by medals. We should as well repeat our success in the international arena.

– Tell us about the brightest moments in the history of Gazprom-UGRA.
– An athlete always has bright moments associated with victories and cups. The most memorable year is when we first became champions of Russia, won the Cup of Russia for the second time and won the UEFA Cup, then held a very emotional final play-off series of five matches. Such a season is a dream. When I first came to the team they set the task before us to win the championship and the UEFA Cup, for me it seemed as far away as the planet of Mars. But then, when we already participated in the European tournament, we beat the existing trophy winners, beat the Spanish team in the final, these were the most unforgettable emotions. Another brightest moment together with the team is the victory in the Cup of Russia of 2012 which is our very first title. Then it was especially pleasant to become the first owner of this cup, having beaten our principal rival.

– What are the distinguishing features of Gazprom-UGRA?
– Now life has shown that stability is the most important thing for the team. Stability in the results, financial stability and stability in relations to the players. Coming into this team, the player feels protected, he does not fear that he can, for example, be deceived. It means a lot to a player. By results, we haven’t always been champions, but always taken medals which is also stability.

VLADISLAV SHAYAKHMETOV: “WE NEED ONLY VICTORY”