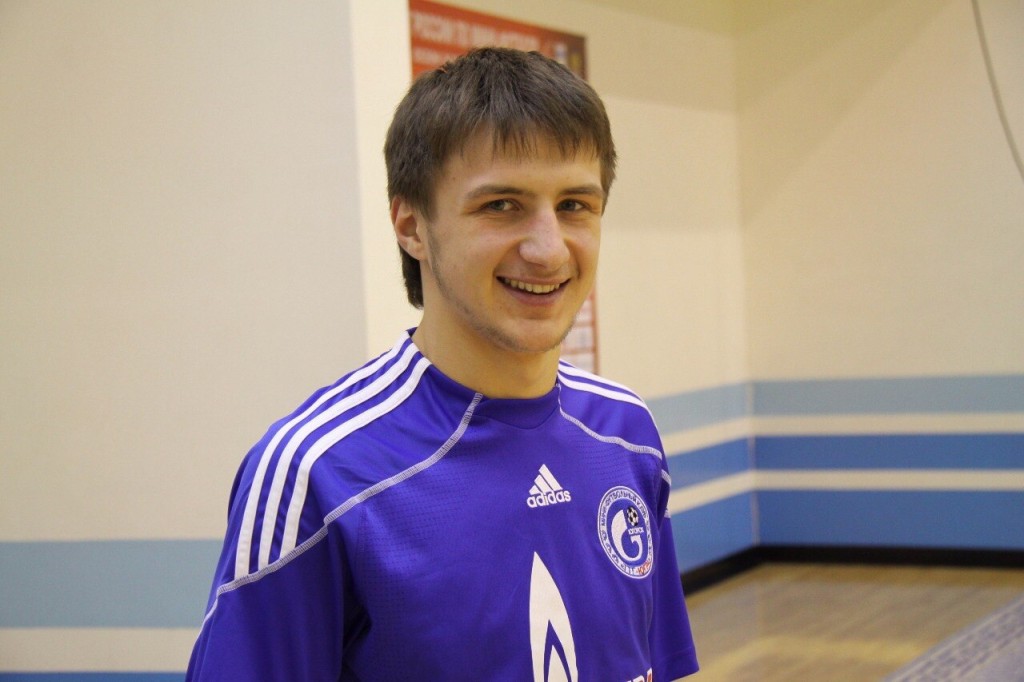 The trainee and captain of our club Danil Davydov told us about his debut for the main team and about his most memorable moments.   – I remember well my debut in 2006, my first game on home site against Ufa team “Dynamo-Timal”. It was the first match of the season, I was announced for […]

The trainee and captain of our club Danil Davydov told us about his debut for the main team and about his most memorable moments.

– I remember well my debut in 2006, my first game on home site against

Ufa team “Dynamo-Timal”. It was the first match of the season, I was announced for the game in the starting line-up and in the first half I scored two goals. It is interesting that one of the

scoring passes in that match I received from Sergei Koridze. We won that match, and those two goals became for me the only ones in that season, but very memorable.

I can say that over 12 years in Gazprom-UGRA I have experienced both the taste of great victories and bitter defeats, various defeats. This club gave me a lot: I also acquired life

experience, and, of course, my professional career. After such an amount of time, I can say with confidence: Gazprom-UGRA is my second family.

– Then the team was just built. The backbone was laid, there were no such high-profile victories, we only gained experience. 10-12 years ago, we were faced with the task of getting into the top three and take medals. Now our only task is to be the first, regardless of tournament we play – the Cup, regular season or the international arena. But the main feature that distinguishes the team of those years from the team we have now is that we have become much more experienced in terms of decisive games.

– What do you especially remember, in addition to high-profile victories in the Russian and international arenas, during the years spent here?

– I can note the friendship between me, Lesha Petrov and Vova Goncharov. For a long time, we

three lived in the same apartment, spent almost 24 hours a day together, did everything together. We had an opportunity to move and live one by one, but we did not want to. Probably, this is the most memorable period from my team life. Our friendship lasts to this day – we stay in touch and our families are friends, we support each other. For me the relationship between people is one of the most important things in life.

– Since the new season, you deservedly became the captain of the team. What has changed since that moment?

– I want to thank the team for their trust, I will try to justify it and not let the team down.

For me, this is an additional responsibility, before I could not think of gaming moments about my emotions, now I try to control them. Maybe sometimes this restraint limits me in some way.

– What coaches and players do you remember working with the most?

– I will note two coaches. It’s Miltinho, I believe that it was he who completely revealed me as

a player. He opened my eyes to the fact that you need to believe in yourself in any situation. He did a lot not only in terms of strategy but in terms of psychology too. It was very interesting to work with him. And, of course, Kaka, there’s not much to say. So much he worked with us, under his leadership we won all the trophies that could be won at the club level. He gave a lot

to our team in general and to each of us. If we talk about the players, then we have always had some of the best players in the world. But I can point out Aleksandr Kopeikin, Robinho and Lima, since we played for a very long time in one quarter formation, and I felt always comfortable with them on the court.

– What distinguishes the FC Gazprom-UGRA from other futsal clubs?

– We have one distinctive feature, it is self-confidence. This is both an advantage and disadvantage. As if paradoxically, we are so confident in ourselves that we can beat any team in the world, but this self-confidence can bring us down, just as we can lose to any team.

– What can you wish the club for 25-year anniversary?