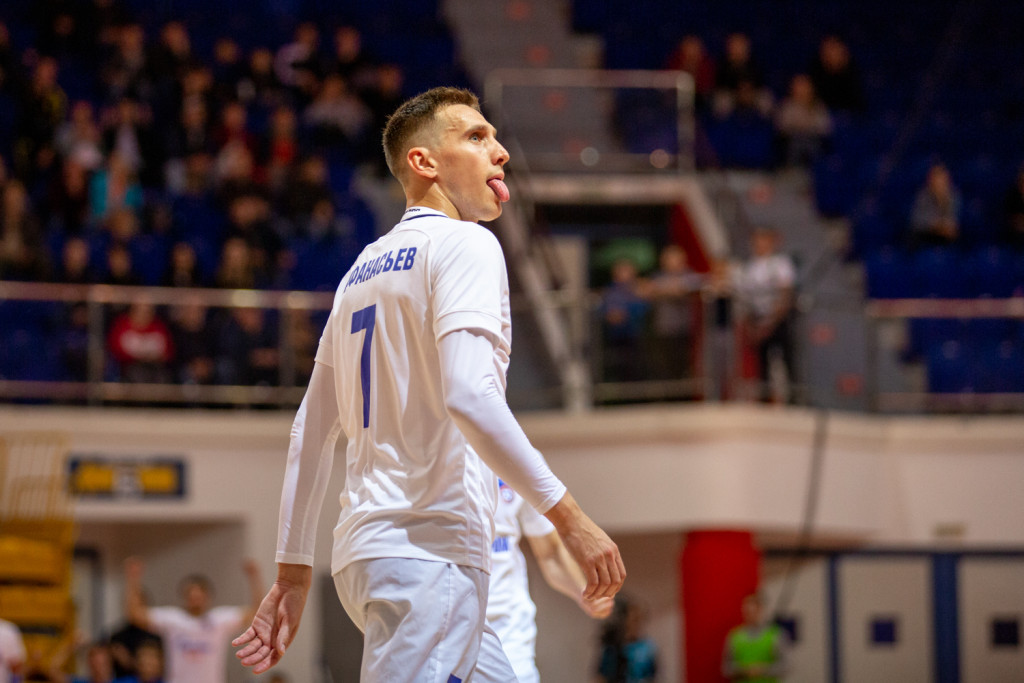 Both teams began to show futsal at oncoming speeds. The first players managed to open the score from Ukhta, in the second minute Aleksey Zotov scored with a great kiss after a pass from the corner. Three minutes later, the Ugra residents leveled the score, thanks to the efforts of Andrey Afanasyev, but the Ukhtins immediately came forward […]

Both teams began to show futsal at oncoming speeds. The first players managed to open the score from Ukhta, in the second minute Aleksey Zotov scored with a great kiss after a pass from the corner. Three minutes later, the Ugra residents leveled the score, thanks to the efforts of Andrey Afanasyev, but the Ukhtins immediately came forward again – Anton Rudykh made an accurate header 2-1. At the 10th minute, Caio showed excellent dribbling and accuracy of a strike, sending the ball accurately into the bottom corner of the visitors’ goal 2-2. The teams continued storming the gates of each other, but Gazprom-Ugra players were more successful in this regard. Afanasiev scored double.

The owners of the parquet started more actively the second half. “Ukhta” clung to its goal, occasionally conducting counterattacks. Goal happened only in the 41st minute. All the same Afanasyev was able to replay and push through the defense of the team from Komi, and then send the ball exactly to the bottom corner, making a hat-trick 4-2. “Ukhta” “swam” and missed one more ball from Vladislav Shayakhmetov. After the fifth goal the hosts relaxed a bit, for which they missed the goal – with a powerful blow, the difference in the score by Denis Povarov reduced the score 3-5. Toward the close of the meeting Afanasyev was able to arrange the poker, and Aleksey Zotov scored a double. 6-4 is the final score on the scoreboard.

– Difficult game. It was evident that the opponent was very motivated, very charged, the opponent offered a game where we always needed to play in a positional attack and we unsuccessfully started the game, immediately missing a goal. I can’t say that we somehow didn’t tune in, but at some moments it was obvious that our level is still much higher when we play 100%, but one player or the second didn’t modify this 100%. It is clear that individual skill is high, due to it we were able to recoup and come forward, but nevertheless, it is very important to play the game correctly and play the game correctly when we have already led to 3 goals. Today I am very disappointed – we lost a player, there were some very provocative actions, but this does not justify him, he had to restrain himself. This is very frustrating, because we now have a very small lineup. Knowing the level of individual skills of my players, I expect more from some of them. Do not rely solely on their skills, here you need to play more with more passion, and movement. And when these things on the site begin to appear, our advantage is immediately noticeable. If a team misses 4 goals, you cannot put an “excellent” mark for the game, you need to refine your defense. But the result is important, we still took 3 points.

– Today it was difficult to play against Ukhta. They scored 2 quick goals, it might have seemed that we had some kind of nervousness, but in fact this was not the case, we positionally completed the attacks with blows, did not allow the opponent to do counterattacks, played well the set-pieces, we had to be patient for a while the ball flew into the net, but in general, the match had a large number of goals.

– We were preparing for such a game. It is clear that we cannot play on equal terms with Gazprom, at the moment we do not have such individually strong players. In general, up to a certain point, we did it well, but the individual skill of a single player, who played great in the pivot position, affected us and we did not cope with it. When the score still allowed us to be in the game, 3-2, there were good moments, but they also needed to be scored. We suffered, we waited for our chance. We wanted to go into the game 5 to 4 with a more comfortable score. But we didn’t have enough, in the second part of the second half we didn’t have enough concentration or strength to end it up with a better score and try to take advantage of the “majority”. Congrats to Gazprom-Ugra on a good game and a victory!

– It is always hard to play with the Gazprom-Ugra team, their skill level is very high, which was confirmed today by Andrey Afanasyev, having scored 4 goals in our gates. But we must pay tribute to our team, we fought . I really liked the game, we will prepare for tomorrow’s game, I think we will give them a battle.