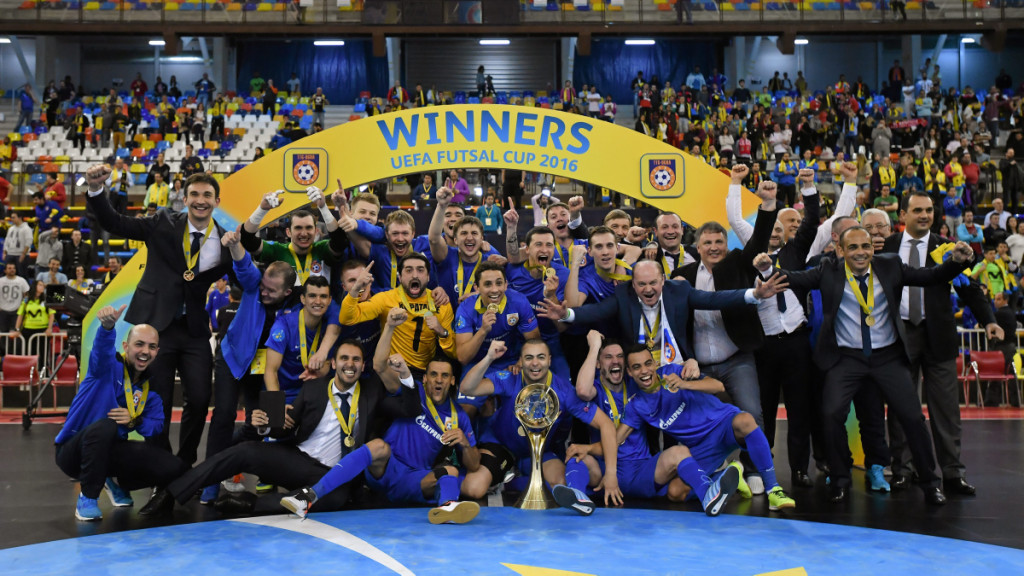 The current futsal champion of Russia, the club of “Gazprom-UGRA”, in their debut performance in the main European club futsal tournament immediately took their victory, beating the hosts of the “Final Four”, Spanish club “Inter Movistar”, 4-3.

The first half, despite the overwhelming game advantage of the hosts, ended up in a draw. The Russian team opened up the score on the 6th minute by implementing a quick counterattack. Robinho fought with two opponents on the right wing, passing to Afanasiev into the penalty area, who didn’t miss. But the Russians weren’t the leaders for a long time. Caio entered the pitch and made a mistake next to Cardinal and Ricardinho, who together managed to score a goal, 1-1. One more player of “Gazprom” made another mistake on the 14th minute, which led to another goal into the net of Sergey Slemzin. Liskov could not stop Pola, who headed a football round into the net. The Spanish created a dangerous moment next to the Russian goal on the 18th minute, which “Ugra” transformed into a counterattack. Davidov approached the goal of “Inter” and passed to a Marcenio who approached the net running, 2-2.

In the second half the Russian team changed for the better and imposed a real struggle to the hosts. On the 38th minute, Andrey Afanasiev scored his double-trick which forced the Spanish to play with an extra man during the last minutes. On the 40th minute, Sergey Slemzin passed the ball to hosts’ goal, to which Jesús Herrero didn’t manage to arrive in time. Katata struggled in the air and the ball crossed the goal line, 4-2! All that could do the Spanish was Shirayshi’s goal 30 seconds before the siren. However, the last seconds could end up in tears for the Russian team, but it looked like fortune was on our side, the ball hit the crossbar, 4-3, a superb victory of the FC “Gazprom-UGRA”!