Danil Tokhtarov shared his emotions from working at the training center 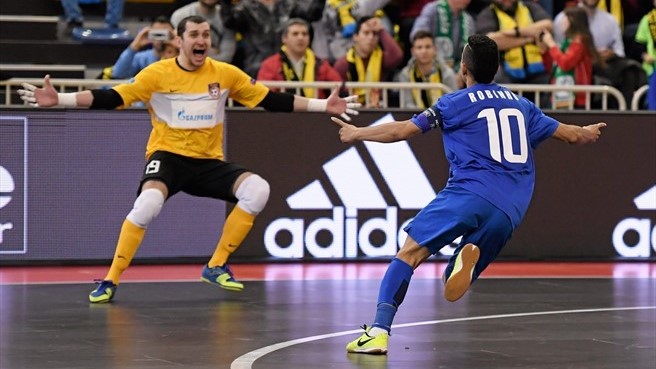 The debutant “Gazprom-UGRA” in Guadalajara beats “Benfica” at the penalties shootout and with the first attempt gets in the UEFA Cup Final, in which we will compete with “Inter”. In gereral “Gazprom-UGRA” leaded the first half and the winner of the UEFA Cup 2008 as part of “Murcia” Juanjo all the time had to save […]

The debutant “Gazprom-UGRA” in Guadalajara beats “Benfica” at the penalties shootout and with the first attempt gets in the UEFA Cup Final, in which we will compete with “Inter”.

In gereral “Gazprom-UGRA” leaded the first half and the winner of the UEFA Cup 2008 as part of “Murcia” Juanjo all the time had to save the net. However, it was “Benfica” who left for the break with the advantage of one goal. On the 15th minute Re passed the ball to Chaguinha and Zviad Kupatadze couldn’t resist the shot of the Brazilian.

However, our team restored the balance already on the 33rd second of the second half. Juanjo stopped the Marcenio’s shot but after the ball rebounded Dmitry Liskov pushed into the net, 1-1. And on 26th minute, the Russian champions lost their main goalkeeper, Kupatadze had a handball outside of the penalty area and was suspended. Nevertheless, the “Eagles” failed to implement a numerical advantage, while “Gazprom-Ugra” was in the minority Sergey Slemzin protected the goal and he acted perfectly.

And as soon as the duel continued in the “five vs five” format, the Russians took the lead. Ivan Signev with his head sent Robinho’s pass into the net. Italian Alessandro Patias drew the result with a penalty kick, but 11 seconds later, Andrey Afanasiev with a pass from Danil Davidov renewed the advantage.

Lisboetas didn’t want to surrender easily. On the 38th minute, Jefferson sent the 3rd ball into our goal, and the fight resulted into an extra time, which for our team began with trouble. As soon as on the 13th second of the overtime Patias scored his second goal and “Benfica” leaded the game again.

But this goal did not break “UGRA” and in the second minute of the extra time the Brazilian, Katata, using his technique scored another goal, 4-4. Finally the game came to a penalty shootout. Marcenio, Vladislav Shayakhmetov and Robinho, who was the last to shoot, did it not miss the opponent’s net, while Slemzin could rebound Rafael Henmi’s kick. “UGRA” is in the UEFA Cup final!

Key player: Andrey Afanasiev “Gazprom-UGRA”
UEFA Cup 2008 Winner and finalist of the next draw as part of “Sinara”. His goal 11 second after the Portuguese made it 2-2 was especially important. What a great moment for a debut goal in the European Cup!

People say that in football a team is most vulnerable after a missed goal. For futsal it is not just a cliché, it’s true. “Ugra” proved this postulate with our third goal scored almost immediately after “Benfica” drew the score. In extra half the Russian team once again repeated the trick very quickly restoring the balance. The first semi-final once again demonstrated just how quickly things can change in futsal.

“GAZPROM-UGRA” HAS FORCES TO WIN!”

Russian teams have lost six of eight European Cup finals, the same statistics has the national team in the European Championships. However, in “Ugra” Afanasiev and Shayakhmetov could conquer UEFA Cup in 2008. Kupatadze will skip the final because of suspension, but the net will be protected by Slemzin, who is showing a good game. Such players as Liskov, Robinho, Afanasiev and Katata may cause a lot of troubles to any opponent.

“Gazprom-UGRA” player, Robinho:
It was equal and extremely tense match, from the first to the last minute. We opposed a magnificent team “Benfica”, a very strong and high-quality team. The opponent opened the score, we managed to draw in the opening of the second half, and then our player was removed. However, the way we fought in the minority, not missing any goal, gave the team great confidence.

It gave us such confidence that we felt we could win the match. Then we constantly leaded the score, and even when we missed a ball at the end [of regular time], we were ready to extra time, in Russia a half lasts 25 minutes, so we’re used to it. In overtime, we quickly missed, but kept ourselves cool, and in the penalty shootout luck was with us.

Head coach of “Gazprom-UGRA” Kaka:
I think the key to winning was our psychological stability. We gave more emotions to the game. Our team is not only strong in technical terms, but also plays with soul. In the first half we had problems due to lack of experience but in the second half we acted more relaxed we could read the game better and believe more in our chances to win.

Nevertheless, of course, when it comes to penalties, anything can happen. We will feel the lack of our suspended captain, Zviad Kupatadze, in the final, but such things happen in the final tournament, unseen players enter the pitch and show great results, the way it happened with our reserve goalkeeper, Sergey Slemzin, and another player, Ivan Signev, who played a little but made the score 2-2.

Head coach of “Benfica” Joel Rocha:
It was a great futsal match, in which two first-class teams met. The game was very equal and I am proud of what my team showed. But it hurts to lose, we can not really believe in what has just happened. Now we want to achieve positive results in Sunday’s match for the third place. And we will grind thoroughly to get back to this tournament in the next season. Our team showed character by responding correctly to all the hardships of today’s match. It says about a strong spirit of the team and about our love to fight on the pitch.

We wanted to maintain the reputation that our team has worldwide. And we have worked for it from the very beginning. The way we were supported from the the bleacher, once again confirms what “Benfica” is. I want to thank the supporters and hope that they won’t leave us on Sunday, because we really need them.