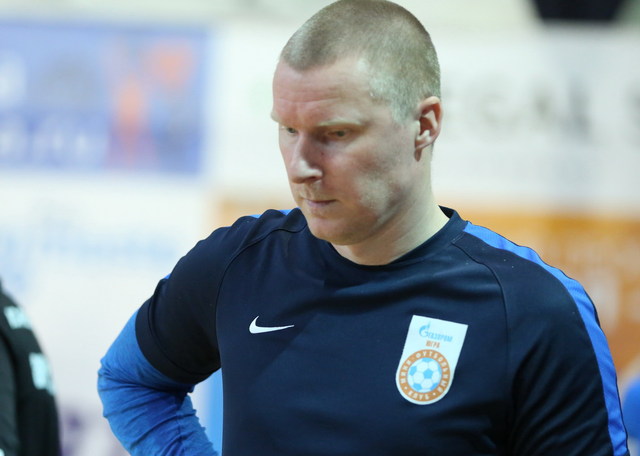 VLADIMIR PRAVSKIY “TRY TO CONCENTRATE ON MY WORK WITH YOUNG PLAYERS”

This is a vast interview of the sub-21 “Gazprom-UGRA” team coach Vladimir Pravskiy, who spoke about his past, present and future. Let us remind you that Pravskiy entered the post in the summer of 2016, before the start of the season. – Vladimir, tell us, when did you finish your professional career and what do […]

This is a vast interview of the sub-21 “Gazprom-UGRA” team coach Vladimir Pravskiy, who spoke about his past, present and future. Let us remind you that Pravskiy entered the post in the summer of 2016, before the start of the season.

– Vladimir, tell us, when did you finish your professional career and what do you do now?
– I ended my career after the 2012-13 season, then I worked as an assistant of Maksim Nikolayevich Gorbunov during two seasons. Due to financial problems, “Mytishchi” went down to the Major League, where I was the head coach. In 2016, at the invitation of my good old friend, Vladimir Kolesnikov, I started working at the sub-21 “Gazprom-UGRA”.

– So you stayed in futsal, it is excellent. How many years did you spend in “Mytishchi”?
– I came to “Mytishchi” after Kazan in 2004 and until last year I had worked there. I spend 9 years in the team as a player.

– Where did you play before?
– I started my career in “Norilsk”, that’s exactly the way the team was called before. Later the club became known to all by the name of “Norilskiy Nikel”. After “Norilsk” I spent 4 months on loan in “Politek”. Then I played for the team “Inteko”, the owners of which were the wife of Yury Luzhkov with her brother Viktor Baturin. We did not finish the season. Due to financial problems the team broke up, but we played pretty well for beginners. Then we played along with Levin Aleksandr, Chugunov Dmitriy, Cernik Aleksandr, Levus Vladimir, Voronin Aleksandr and Garagulya Genadiy. After “Inteko” I spent two and a half years in a Kazan club “Privolzhanin”. We also had a good team over there: Nahratov Vladimir, Stanislav Larionov, Stepanov Aleksey, Bujor Vitaliy. After, as I said before, I started my carrier in “Mytishchi”.

– How long you were a captain? What does to be a team captain mean to you?
– Excluding a couple of seasons, I was a captain all the time. For me a captain is a man who doesn’t just yells at other players, but can inspire the whole team by his example, I mean a game example in any difficult situation for the team. And, of course, a captain is a connecting link with the coaching staff, the conductor, if we can say so, of his ideas in the game, during training sessions, an example for young players in the team.

– A lot of guys in “Mytishchi” have grown up to a very strong level of the Russian national team players. Who stands out? Dmitriy Lyskov?
– Yes, a lot of guys acquired game practice and valuable experience in early stages of their career, such as Marat Azizov and Rishat Kotlyarov. Daniil Kutuzov and Dmitriy Lyskov came as players of the sub-21 national team. Later on they moved to the “Dina” and “Gazprom-UGRA” and grew to country’s main team.

– Former “Mytischi” goalkeeper Oleg Tolstikhin recently opened a training center for futsal goalkeepers. Didn’t you have any desire to open up your own project?
– Yes, I see Oleg from time to time, we play soccer together with our friends every Wednesday on a futsal arena with artificial turf. I haven’t thought my own project yet, now I am more focused on my personal development, what’s more now I have a great opportunity to follow training sessions of the main “Gazprom-UGRA” team. Besides it, once a week Kaka with the assisting coach Sergey Koridze do joining trainings with the sub-21 team. This is very interesting, both for the young guys and for us coaches.

– Have you received any special education to become a coach?
– Yes, I’ve graduated from the Regional Pedagogical Institute with a degree in physical education and passed an exam at the futsal association for sub-21 coaches in 2015. I’ve received a license for this type of activity for three years.

– “Gazprom-Ugra” has already raised Chishkala, Niyazov, Asadov and other young talents. This year revelation is Pirogov. Who is next?
– It is difficult to say, so many young guys have just come here. Among those who have been in the team for many years, the following are promising: Cherniy Aleksandr, Kutsak Kirill and our goalkeeper Nikonorov Maks.

– Is it interesting to work in the sub-21 Gazprom team? Is there any options for further career development?
– It is very interesting! You can work with young players who you can see grow and progress, you can also see how the best European team trains and the level we should strive to get to, where we need to direct our youth to. I don’t really think of my career yet, just trying to focus on my work with young plyers.

10 GOALS FROM THE CHAMPIONS